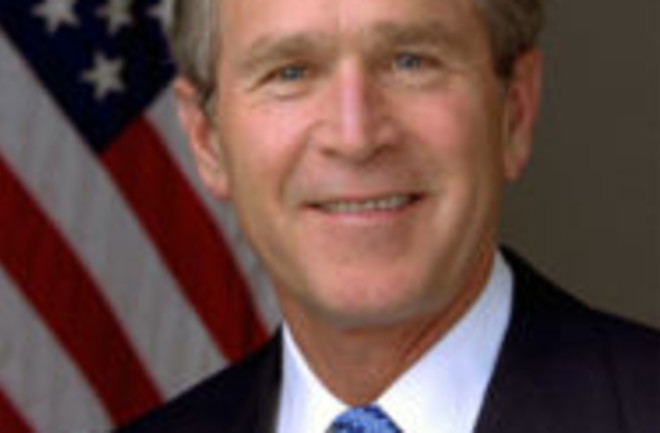 And so this is what it has all been building up to: Leadership. If New Orleans is languishing right now, there's one chief person to blame. And if we're not investigating how global warming is going to change our hurricane risks on a national level--well, again, there's one person to blame. The person in charge of the government that is currently failing us. It's not a particularly original observation these days to note that George W. Bush has built quite a legacy for himself. The black marks will include the mess in Iraq, the mess in New Orleans, and the failure to address global warming in a timely fashion--among many other things (like ignoring and undermining science throughout the federal government). And it's not just that Bush has failed to join a global climate treaty or to order the EPA to regulate CO2. His administration has gone further by actively thwarting global warming preparedness measures for this country. As whistleblower Rick Piltz has so eloquently explained at Climate Science Watch, the administration both deep-sixed and then failed to build upon a Clinton era study, the U.S. National Assessment**, that was directed towards precisely that end: Preparing us. Getting us ready. Hurricane risks were included. But instead of seriously engaging in such a needed process, the administration has instead exaggerated scientific uncertainty about global warming as a justification for foot-dragging and inaction. Meanwhile, our risks as a nation have been changing in often unknown but troubling ways. But alas, Bush and his acolytes don't seem to to get any of the previous three Katrina "lessons" concerning how to think about science, risk, and uncertainty. And by their inaction and incompetence, they're preventing the rest of us, the nation, from adequately grappling with them as well. And so, perhaps, the ultimate takeaway point two years after Katrina is this: It may not be until 2009 at the earliest that we adequately address our hurricane risks, or our climate risks, in this country--or that we actually get really serious about rescuing New Orleans. And thanks to George W. Bush, these problems will likely only be harder to address in the future than they are now, or than they were at the start of this administration. We can only hope that by the time we finally have a new leader who takes science and preparedness more seriously, it won't be too late.

** For the National Assessment of 2000 see here. Ignore the bogus disclaimer.