Sheril and I are going to give the blog over to the subject of Hurricane Katrina and its legacy today, in honor (and in mourning) of the two year anniversary. We're going to try to focus on lessons learned in particular, and as this is my particular bailiwick, I'll likely be doing most of the posting. And so I'd like to start off with the central lesson that I think we can take away after two years of the post-Katrina hurricane-global warming debate: science doesn't confer certainty; but scientific uncertainty doesn't justify inaction, either. I elaborate on these thoughts in much more detail in my latest "Storm Pundit" post at The Daily Green, which is actually an essay-style recap of how Katrina triggered a dramatic flare-up of debate over hurricanes and global warming, leading to much media attention and scientific argumentation but few clear answers. Here's an excerpt:

And so in the weeks and months following Katrina, the media and public demanded definitive answers about hurricanes and climate change that scientists, as a group, were simply unable to provide. Science never confers absolute certainty, and especially not on a subject as novel and complex as this one. The intense hurricanes of recent years -- including last week's Category 5 Hurricane Dean -- may or may not be a smoking gun for global warming. But the debate over them following Katrina teaches something very different: How (and how not) to navigate knotty science policy debates in which the underlying information is hardly definitive, and yet nevertheless of great consequence.

You can read the whole piece here. We will have more Hurricane Katrina lessons as the day progresses. In the meantime, though, a picture is more powerful than any number of words: 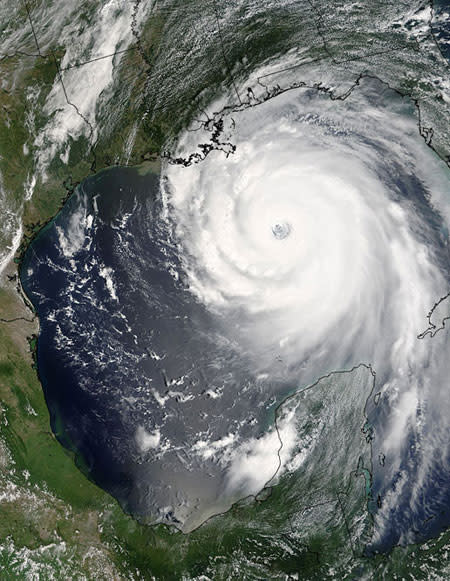