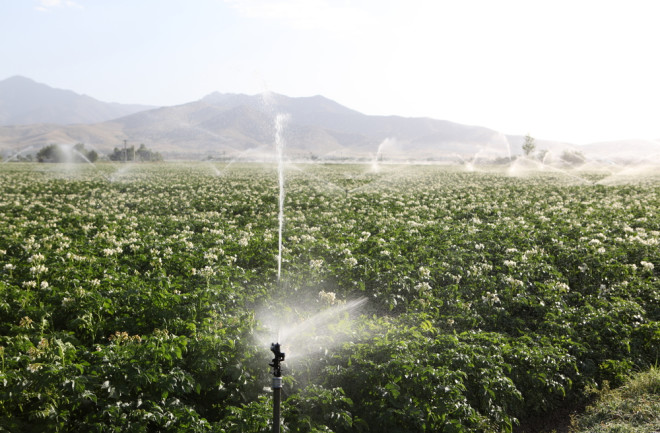 (Credit: M.Khebra/Shutterstock) In drought-stricken California, a new study finds that there is indeed gold "in them thar hills." The gold here, of course, being none other than fresh water, a resource that may well surpass the shiny yellow metal in terms of value as farmers, corporations and average citizens struggle to absorb the impacts of an historic drought that shows few signs of letting up. A new study by researchers from Stanford University plumbs new depths for hints of useable water and seems to have hit the jackpot. The researchers extended their search to depths of almost two miles beneath the surface and report the presence of large aquifers deep below the ground. That water could come with a price though. California is also home to enticing stores of oil and natural gas, and thousands of wells are currently in operation in the state. Drilling activities directly threaten the health of many of these deep reservoirs, the researchers warn in their paper.

Other Kind of Liquid Gold

The researchers compiled data from the California Division of Oil, Gas and Geothermal Resources, which tracks oil and gas wells around the state. Researchers determined if water had been detected while drilling, and also gathered data about depth, salinity and pressure. After looking at 360 oil and gas fields spread across eight counties, the researchers say that they've documented a trove of fresh water just over half the size of Lake Michigan hidden in California's bedrock 1,000 to nearly 10,000 feet below the surface. This is almost three times more groundwater than what was indicated in previous studies, many conducted over 20 years ago, and which stopped at a depth of 1,000 feet. Water any deeper than that was considered too expensive to retrieve, and could remain out of reach for the foreseeable future. While the survey extended to around 10,000 feet, the researchers say that much of the water lies closer to the surface, around 3,000 feet deep. The researchers published their work Monday in the Proceedings of the National Academy of Sciences.

The researchers defined fresh water as as containing less than 3,000 parts per million (ppm) of dissolved solids. These solids are often salt, but can include other unwanted chemicals, as well. The United States Geological Survey, however, defines fresh water as containing less than 1,000 ppm of dissolved solids. Much of the water found by the researchers, therefore, may require varying levels of treatment. In addition, much of the water is trapped in porous structures in the rock, instead of just sitting underground in giant pools. The dual challenges of extracting and treating the water are indications that these underground aquifers may not be the bonanza they seem to be. It is clear however, that California must adapt to a drier future, whether that means tapping new sources of water or cutting back consumption. The state used 38 billion gallons of water a day in 2010, which works out to around 1.3 trillion gallons a year. A growing agricultural sector in the state, combined with persistent drought, has only increased the demand for water, and traditional sources of groundwater haven't kept up with the state's thirst.

The good news comes with a dark lining, however. Many of the underground aquifers are at risk of being contaminated by oil and gas drilling activities in the region. The wastewater from many wells is injected back into the rocks deep below the surface, where it could leach into untouched reservoirs. Drilling run-off is extremely salty and sometimes filled with other, more harmful, chemicals. If this water breaches uncontaminated aquifers, it could render them unusable. According to the researchers, 19 percent of the drilling in the counties surveyed occurs in areas that also contain freshwater reservoirs. When dirty water from the wells is forced back into the ground, it causes pressure increases that can allow run-off to spread via faults throughout the bedrock. While most oil wells are deep, if the pressure is sufficient, it will push the water back upwards, toward untouched reserves of fresh water. While researchers couldn't quantify the actual risk of contamination caused by drilling, they say that their work highlights the need to study previously undocumented deep sources of potentially usable water and protect them.

Also of concern is the risk of subsidence, or the collapse of the overhead rock, that sometimes occurs when underwater aquifers are drained. When the water is pumped out, what was previously a pool becomes an empty cavern, and if the surrounding rock isn't stable enough, it can buckle inwards. It's quite similar to the process that leads to sinkholes, and can similarly lead to major problems for buildings and infrastructure on the surface. The presence of two lucrative, yet potentially incompatible, resources sitting beneath California's hills and valleys raises questions for regulators and businessmen alike. Tapping into these reservoirs would be expensive, given how deep they are, but could provide a desperately sought-after answer to the water crisis. Doing so may entail curtailing drilling activities in some regions, however, an option that would likely prove unpopular among the many oil and gas companies already operating in the area.