How To Restore a Dying Reef 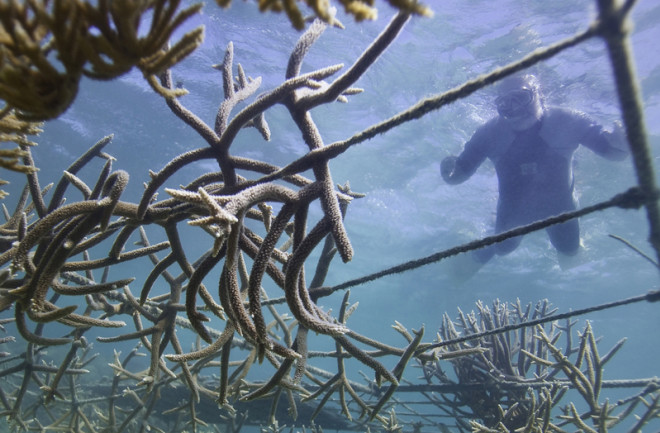 The world’s reef systemsface unprecedented stresses, under threat from overfishing, pollution and climate change. Most threatened is the Caribbean reef system, with more than 80 percent of its live coral cover disappearing since the 1970s, largely due to global warming. A visual example of this toll is called coral bleaching, which turns the animals a ghostly white — the result of warmer waters expelling the algae that give coral its color and sustenance.

An innovative project in southern Belize is working to turn the tide not just by rebuilding reef systems, but also by learning from natural heat-resistant corals. The research was inspired by a serendipitous discovery after Hurricane Iris tore through Central America in 2001. The storm demolished large swaths of the Belize Barrier Reef system, part of the Mesoamerican Reef that stretches nearly 700 miles from the eastern tip of Mexico to southern Honduras. “We found the shallow reefs near the shore were actually healthier than the outer coral reefs,” recalls Lisa Carne, an American-born marine biologist who manages the internationally funded reef restoration project Fragments of Hope.

“Since these regions were hotter and more vulnerable to human impacts from the mainland, just the opposite should have happened. The question was why?” says Carne. “Is it the genetics of the coral? Or it is something about the genetics of the algae that lives inside them? If we can understand what makes some of them more resilient, then we can facilitate this adaptation process.” While they work out the answer, Carne’s team has seen remarkable success in using these extra-tough corals to revitalize the reefs.

Some corals can reproduce like grafted plant clippings through budding or fragmentation, when broken fragments regenerate and form new colonies. Carne and her research team collected broken pieces of elkhorn and staghorn corals — critically endangered and nearly 98 percent wiped out — from the healthy reefs and moved them to eight coral nurseries. These were set up at cayes in and near Laughing Bird Caye National Park, a 10,000-acre marine reserve off the coast of southern Belize. They made sure to transplant a genetically diverse crop, and then grow it in its natural environment (as opposed to the artificial setting of a laboratory or an aquarium). Since 2006, they’ve planted more than 8,000 bleach-resistant corals off the coast of southern Belize, creating thriving colonies. Once they figure out what makes these species so hardy, transplanting coral could become routine.

Building a Reef in 5 Steps

1. At the eight coral nurseries located around Belize’s Laughing Bird Caye National Park, staghorn and elkhorn corals are placed on metal, framed tables, which provide a supportive surface for the two species’ artificial growths: cement discs (called cookies) that contain fragments of flowery elkhorn coral, and ropes that are seeded with the spindly staghorn corals.

2. The cookies, made from a mix including cement and sand, are tied to the metal trays with fishing line. The cement cookies allow slower-growing elkhorns to be cultivated in the nurseries.

3. The ropes are more straightforward: The faster-growing staghorn corals are broken into pieces, and then threaded through strands of braided fiber ropes, which are then strung across the metal frames.

4. Once the staghorn and elkhorn corals are grown and harvested in the nurseries, they are then taken to the outer reefs to be transplanted. They travel within large plastic buckets, soaked in seawater and shielded from the sun to reduce stress.

5. More than 80 percent of the nursery-grown coral have survived this transplantation in the reefs.