How to Build A Mountain Range 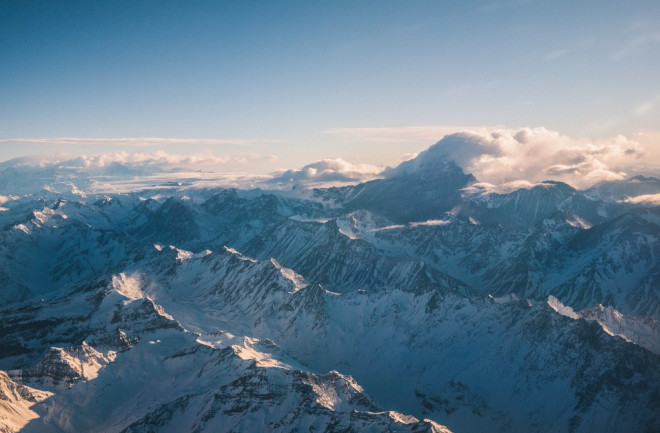 An aerial view of the Andes mountains in Argentina. (Credit: Nicolas Prieto/Unsplash) There’s only one place on the planet where you can see flamingos roaming salt flats, vicuñas grazing in herds and condors soaring overhead, all as hot springs bubble beneath towering volcanoes. It’s the Altiplano of South America — a nearly 1,000-kilometer-long, otherworldly plateau that stretches from southern Peru through Bolivia and into Chile and Argentina. At an average 3,800 meters above sea level, the Altiplano is the high-altitude heart of the Andes Mountains. To the plateau’s east and its west, chains of mountains soar some 6 kilometers high, rocky backbones that snake along the western edge of the South American continent. The sheer volume of elevated ground makes it especially fascinating to those who study the Earth’s deep dynamics: How did so much land soar so high into the air? And how did that rise change the planet? Researchers do know how the story began: around 200 million years ago, when one enormous plate of Earth’s crust began diving beneath another. Around 45 million years ago, the process sped up, and the plate on top began crumpling skyward to form the Andes. But the details of how it happened have remained unclear.

On high ground between the Andes mountain ranges, the Altiplano extends from Chile and Argentina into Bolivia and Peru. (Credit: C.N. Garzione et al./AR of Earth and Planetary Sciences 2017) Now, new clues are emerging from the rocks that form the Altiplano. For millions of years, the plateau has been filling with sediment that washes down from the nearby ranges. That makes it a geological time capsule containing a record of the mountains’ past. “The Altiplano basin has this amazing climate archive that goes back tens of millions of years,” says Carmala Garzione, a geologist at the University of Rochester in New York. “You can literally march through time as you walk through these strata.” By probing those layers of sediment, Garzione and her colleagues have found that parts of the Altiplano didn’t gain their great height until 5 million to 10 million years ago. That means the Andes did not rise gradually over the last 45 million years, but lurched skyward in dramatic pulses. Cold, dense rock beneath the Altiplano would have weighed it down like an anchor. When blobs of that rock dripped off its underbelly into the deeper Earth, the Altiplano became more buoyant, like a bobber on a fishing line, and rose higher. Scientists’ interest goes beyond the origin story and the machinations of Earth. Being so close to the sky means the world’s mountains also exert a heavy influence on atmospheric circulation, which alters weather and climate. And the Altiplano’s time capsule captures those changes. As the Andes grew to their current height, they shaped the climates and history of South America. They trapped water on the eastern side of the ranges, allowing the great Amazon River system to develop and flourish. On the west, the Atacama Desert is one of the driest places on Earth. “From our perspective as humans looking at mountains, it’s why we are interested,” says Nadine McQuarrie, a geologist at the University of Pittsburgh. “How do these mountains, these really big impressive features we can see and experience, alter the world?”

The Andes are one of the best places to study geology in action. The Nazca oceanic plate slides eastward and dives beneath the South American continental plate. As the plates come together, the continental plate becomes riddled with faults. Like a car smashing into a brick wall, it crumples, shortening and becoming thicker. The thickening crust continues to push the Andes into the air; their highest peak, Aconcagua in Argentina, currently reaches nearly 7 kilometers above sea level. To understand the history of the Andes, researchers look deep beneath their feet. Among other tools, they use a network of seismometers to measure the location and magnitude of earthquakes occurring where the plates meet. Those measurements reveal the varying depth of the plate boundary and the geometry of the crust below, giving scientists insight into the details of mountain building. In 2010 a University of Arizona-led team also peppered the northern part of the Altiplano with 50 additional seismometers for two years, showing more clearly how the crust was thickening in that region. Part of the crust wasn’t behaving as expected. Earth is layered with brittle rocks on top, a region called the lithosphere, which includes all of the crust and a little bit of the underlying mantle. Beneath that, starting at roughly 100 kilometers deep, is the asthenosphere, where mantle rocks are warm enough to flow like hot taffy. In the Altiplano, researchers expected to see cold rocks near the bottom of the lithosphere, at about 45 to 70 kilometers beneath the Andes. But the seismic waves showed that there were hot rocks there. Garzione thinks that relatively cold, high-density rocks called eclogite detached as a blob and sank into the Earth. “It’s kind of like a lava lamp, but in this case it’s a one-way lava lamp,” she says.

Evidence suggests that the Altiplano rose in pulses — speedy for geologic phenomena. One explanation for these pulses involves the dripping of dense rock called eclogite from the lower crust, buoying the land above. (Credit: K. Cantner (American Geosciences Institute)/Earth Magazine) Once that eclogite blob dropped off, the overlying lithosphere bobbed higher, raising the plateau. Garzione and her colleagues, including McQuarrie, describe the scenario in the 2017 Annual Review of Earth and Planetary Sciences. They cross-check this story through geology. As sediment washed off the high Andes into the Altiplano, it built up into rock layers, producing an unprecedented environmental archive of the past. “It’s an excellent place to do the climate studies you need to do,” says Garzione, who spent years working in the high Himalayas before turning her attention to the Andes. The Altiplano rocks contain clues to the heights of different parts of the plateau at various points in its past. Some of the clues rely on the fact that temperatures generally get cooler the higher you go — think of driving up a mountain to escape the summer heat. Those temperature differences are reflected in the differing amounts of heavy and light forms of elements such as oxygen and carbon in the Altiplano rocks. By measuring the chemical ratios in rocks of a certain age, scientists can figure out how high the Altiplano was at that time. In some places they found it was moving upward in bursts as rapid as half a kilometer or more every million years. “For a geologist that’s very fast,” says Garzione. The Altiplano could have rocketed up so quickly only if something heavy, like an eclogite anchor, dropped off its bottom, she says. The process might even happen in cycles; after a cold blob drops off, another forms in its place and eventually detaches as well. In at least one place beneath the eastern Andes, a combination of evidence suggests, one blob probably detached between 22 million and 17 million years ago, and a second one between 10 million and 5 million years ago. Still, there could be a second mechanism at work. Beneath the mountain ranges that border the Altiplano, to the west and the east of the plateau, the lithosphere is relatively thick. Heat rising from the asthenosphere can warm the lithosphere above, heating rocks so they flow like molasses from beneath the neighboring mountain ranges to beneath the Altiplano. This process, known as crustal flow, could have helped the Altiplano thrust so rapidly upward during some periods. “That’s another process by which you can thicken an area and raise its elevation,” says McQuarrie.

Another way to raise the Altiplano is for warm rocks to flow, like molasses, from beneath the neighboring high peaks of the Andes. Scientists think that both eclogite detachment and this kind of thickening occur in the Andes, uplifting the land. (Credit: C.N. Garzione et al./AR of Earth and Planetary Sciences 2017) For now, there’s no way to tell whether the eclogite-anchor or the crustal-flow idea is more important. Some combination of the two may have ultimately pushed the Altiplano skyward, Garzione says. When the eclogite anchor drops off, that detachment may cause hot rocks from the asthenosphere to well upward in the region, allowing the crustal flow to get going and the molasses to begin flowing. What scientists learn in the Andes can illuminate other parts of the world as well. That includes the Tibetan plateau, which began forming about 50 million years ago when the Indian crustal plate rammed into Eurasia. The plateau now sits at an average of 5 kilometers high, where it modifies weather and climate patterns such as the Asian monsoon. Unlike the Andes’ Altiplano, the Himalayas’ Tibetan plateau does not contain a detailed sedimentary record — and so the studies in the Andes can help scientists better understand the broad geological patterns that could have also shaped Tibet. Meanwhile, the American West holds clues to the Altiplano’s future. Geologists think there was once a high-elevation plateau there similar to the Altiplano, but starting around 30 million years ago it began to collapse as the crust beneath it spread apart. Today it is the lower but still spectacular landscape of the Basin and Range of the southwestern United States and northern Mexico. One day, after the Nazca plate has been completely subsumed, the Altiplano may look like this as well. So understanding the rise of the Andes helps geologists understand the stability of mountain ranges over time, says McQuarrie. One day, they will begin to collapse and sink back to lower elevations. But for now the heights of the Altiplano are a rare way for scientists to explore the depths of the planet, she says. “That’s where you can get insight into the deep processes that are going on in the Earth.”

Alexandra Witze (@alexwitze) majored in geology because hiking and camping for college credit seemed like a great idea. She is now a science journalist in Boulder, Colorado.