How leatherback turtles grow huge on a diet of jelly 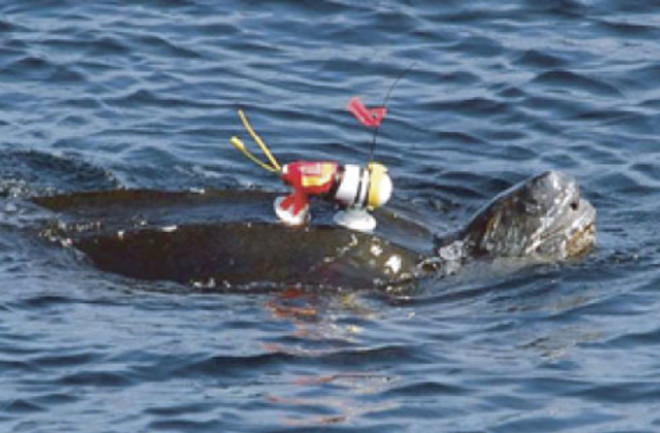 Imagine eating nothing but jelly all your life. It’s hardly the richest source of food, and you might expect an animal with such a menu to be small and feeble.  You’d be wrong. The leatherback turtle eats jellyfish and little else, but it grows up to 640 kilograms in weight, and can migrate over thousands of kilometres. How can such a powerful giant subsist on such ethereal meals?

This is not an easy question to answer. Leatherbacks feed well below the ocean surface, and the jellyfish they seek are found in dense but sparse patches. Finding the animals, and studying their eating habits, is very challenging. Mike James from Dalhousie University, Canada, did it by attaching small video cameras to the shells of 19 turtles.

She tracked the animals off the eastern coast of Canada, where they gather in large numbers during the summer. As they came up for air, James dleftly pasted the cameras onto their backs. The devices recorded continuously for a few hours and James tracked them via GPS. When the turtles resurfaced, she retrieved the cameras.

The videos revealed that, in Canada at least, the turtles mainly feast upon the largest species of jellyfish – the lion’s mane. The jellyfish’s bell can reach several inches across, and its long trailing tentacles are packed with stinging cells. But the turtle swallows it nonetheless. Its sharp pointed lip snags the jellyfish, while nightmarish, backwards-pointing spines in its mouth and throat prevent the victim from escaping.

Each individual jellyfish may be relatively short of nutrients, the turtle grows fat upon them for several reasons. For a start, the turtles’ attacks never fail. While a gazelle will regularly manage to escape from a lion, and a seal will often outrun a shark, jellyfish can never evade a hungry leatherback. With a 100% success rate, all the turtles have to do is to find their prey. And that’s easy – the lion’s mane is found in large swarms in the summery Canadian waters, so a diving turtle runs into a couple of them every minute.

The jellies aren’t particularly fast, so it takes just 22 seconds to catch up to one, and another minute to eat it. The turtles can swallow dozens in quick succession, and they leave nothing behind. The jellyfish may not be an especially nutritious meal, but none of it goes to waste.

Heaslip estimated that during the summer months, the turtles eat around 73 per cent of their own body weight every day, packing in around 16,000 calories. That’s around 3 to 7 times more than they actually need to survive.

This summer binge allows them to dramatically increase their body weight before heading off on the long voyage to find breeding spots. It’s a 9,000 kilometre trip, fuelled by the unlikeliest of diets.