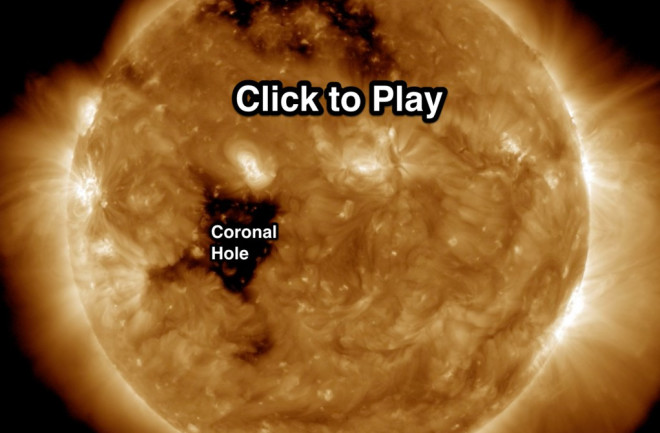 Screenshot from a video showing a hole in the Sun's corona rotating toward Earth. The imagery was acquired by NASA's Solar Dynamics Observatory spacecraft over 48 hours, ending on Nov. 1, 2015. (Source: NASA/SDO) **UPDATE Monday 11/02/15**:

Since I wrote this post over the weekend, the aurora forecast has changed. The northern lights could be visible tonight as far south as Oklahoma and North Carolina! The highest activity is forecast for tonight. But auroral displays will continue to be visible farther south than usual through Friday. For the latest forecast, go here.

You read the headline right: There is indeed a "hole" in the Sun. To be more precise, there's an area where the density of plasma in the solar atmosphere, or corona, is much lower than the surroundings, creating a dark splotch on the Sun's face.

Called a "coronal hole," it's a region where magnetic field lines are open. This allows a stream of charged particles to spray out into space. And as the video linked from the image above shows, that coronal hole has rotated into clear view by NASA's Solar Dynamics Observatory spacecraft. And as it happens, that hole is also facing us now. So as I'm writing this early Sunday morning, the enhanced stream of solar wind particles is headed toward us, prompting the Space Weather Prediction Service to issue a strong geomagnetic storm watch for November 2 (UTC day), and a moderate watch for November 3. When the particles reach us, they could disturb the magnetic bubble, or magnetosphere, that surrounds and protects Earth. The resulting geomagnetic storm could cause some degree of disruption to satellite communication and navigation systems, power transmission grids, and other systems.

Why Has the Sun Developed a Huge Hole?