Here's what the devastating flooding from Florence looks like from space

An animation of before and after images acquired by NASA's Terra satellite shows flooding in the wake of Florence across southeastern North Carolina and northeastern South Carolina. (Source: Modified from CIMSS Satellite Blog) You've probably seen imagery shot in the Carolinas showing the devastating flooding that Hurricane Florence left its wake. Now, check out what that flooding looks like from space — in the before-and-after animation above of false-color satellite images. The images were acquired by NASA's bus-sized Terra satellite, which circles Earth in a polar orbit 483 above the surface. The before image was captured on August 26th; the after image on September 18th. Flooded waterways in the post-storm image appear in dark blue. As I'm writing this on Sept. 19, at least 16 rivers remain at a major flood stage. And others have yet to crest. 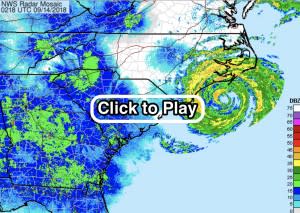 Radar loops covering a 104-hour period show Florence's slow march through the Carolinas. (For more animations, go here. Source: Brian McNoldy, Univ. of Miami, Rosenstiel School) As Florence slowed after landfall, and crawled along the Carolina's coast at a mere 2 to 3 miles per hour, it dumped huge amounts of rain for a prolonged period. North Carolina experienced 35.93 inches of rainfall — a new state record for precipitation from a tropical cyclone. South Carolina experienced its own new record at 23.63 inches. The devastation from Florence includes at least 35 fatalities, according to a dispatch from Reuters. More than 15,000 people remain in shelters. Yesterday, another horrible impact of Florence became known: 3.4 million chickens and turkeys, and 5,500 hogs have been killed in the flooding. Floodwaters have also caused waste from hog farms to flow into waterways. As of noon yesterday (Sept 18), waste from 13 North Carolina "swine lagoons" had flowed into waterways, according to the North Carolina Department of Environmental Quality. Overtopping of an additional 30 lagoons was likely. Floodwaters have also breached facilities where coal ash from power plants is stored. Coal ash is laced with toxic and cancer-causing chemicals, including arsenic, lead, mercury, cadmium, chromium and selenium. Torrential rain and resulting flooding caused the wall of a coal ash landfill near Duke Energy's L.V. Sutton power plant to fail in several places. "By Saturday, Duke Energy estimated, the storm had washed away more than 2,000 cubic yards of coal waste — enough to fill more than 150 dump trucks," according to the Washington Post.