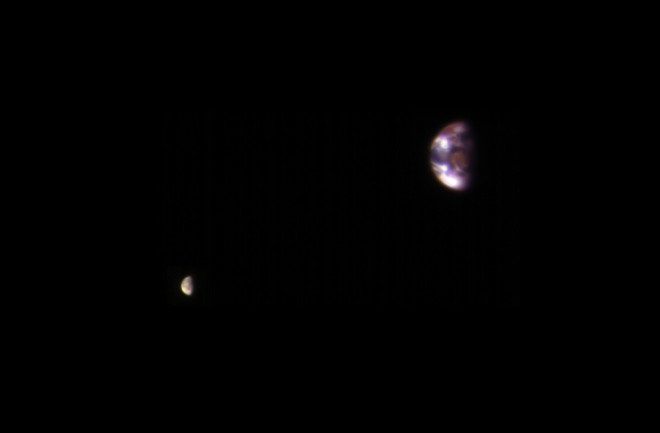 The HiRISE telescopic instrument in orbit around Mars captured this view of Earth and the Moon, showing continent-size detail on our home planet. (Source: ASA/JPL-Caltech/Univ. of Arizona) (Source: ASA/JPL-Caltech/Univ. of Arizona) Just two days ago, I posted a spectacular picture from the most powerful telescope orbiting Mars showing a fresh blast zone and crater gouged into the surface of Mars by an impacting space rock. Now, comes this spectacular composite image, acquired around the same time. You're looking at Earth and the Moon, as seen on Nov. 20, 2016 by the High Resolution Imaging Science Experiment camera on NASA's Mars Reconnaissance Orbiter. The Mars orbiter was 127 million miles from our home planet when HiRISE captured the images that were composited to produce this view.

SEE ALSO: A chunk of interplanetary debris recently slammed into Mars and left this fresh crater and spray of ejecta

The bright blob at the bottom-left of Earth is Antarctica. Other bright white areas are clouds. Meanwhile, the reddish feature toward the middle is Australia. And Southeast Asia is at upper left. The lushly green region appears red because this is a false color image. Something else is not rendered perfectly naturally either. In reality, the Moon is much darker than the Earth. Yet here they are rendered at roughly the same brightness. This allows details to be seen on both the dark Moon and bright Earth. To accomplish this, the separate images used to create this composite view — one of the Moon and the other of Earth — had to be processed separately. Even so, the two bodies are show in their correct positions and sizes relative to each other.

A portrait of Earth and the Moon, acquired on October 3, 2007, by the HiRISE camera on NASA's Mars Reconnaissance Orbiter. This isn't the first time that HiRISE has turned its view toward home. The image above was acquired by the instrument back in 2007. Most of what's visible on Earth in this image are clouds and ocean. But if you look really closely and squint, you may be able to make out the west coast of South America at lower right. Scientists didn't create these images just to give us pretty portraits of Earth and the Moon as seen from millions of miles away. It turns out that training HiRISE's gaze on the Moon allows them to do careful calibration of the instrument. That's because the reflectance of light from the Moon's surface is well known.