Guppies Sacrifice Looks When Predators are Around 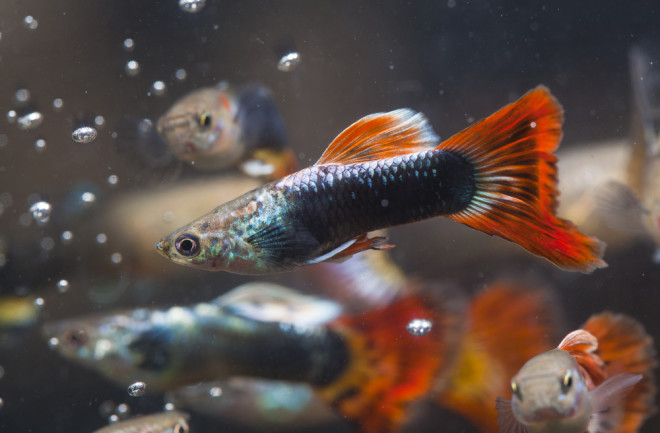 Trinidadian guppies (Poecilia reticulata). Image courtesy of voylodyon/Shutterstock Male guppies develop flashy colors to woo potential mates. Their colorful displays grab the attention of the ladies, but also the predators. With sexual selection telling the males to stand out and natural selection encouraging them to blend in, what's a guppy to do? While coloration is coded in the male fish's genes, the expression fluctuates. Environmental factors such as food and predators push the fish to be more or less colorful. Researchers wanted to know just how much wiggle room the genes allowed in coloration, a concept called "phenotypic plasticity," so they put the guppies to the test. The researchers raised four groups of male Trinidadian guppies (genetic brothers) and exposed each to a different environment: one with plenty of color-inducing food, and another with only half as much; one with chemical signals in the water from a common predator called the pike cichlid fish, and a final one without. Over the course of a few months, the researchers recorded the changing appearance of the fish as they grew from colorless youngsters to vibrant, sexually mature male guppies. The underfed fish took five extra days to reach maturity compared to their satiated counterparts. In the end, though, both groups sported the same amount of color. The fish raised in the presence of chemical predator cues, on the other hand, showed a much more noticeable difference. Not only did the predator cues delay the guppies' maturation process by a few days, but it also produced less colorful fish. These mature guppies had about a third less color than those raised without the predator cues. At the risk of being found less attractive by color-loving females, then, the male guppies seemed to sacrifice their sex appeal for the sake of at least being alive by time mating age rolled around. The researchers say their results are the first example of phenotypic plasticity where a male become less attractive to potential mates for the sake of being less noticeable to predators. This could give the guppies a real advantage by allowing them to adapt to different environments within the span of a single lifetime, instead of over many generations.