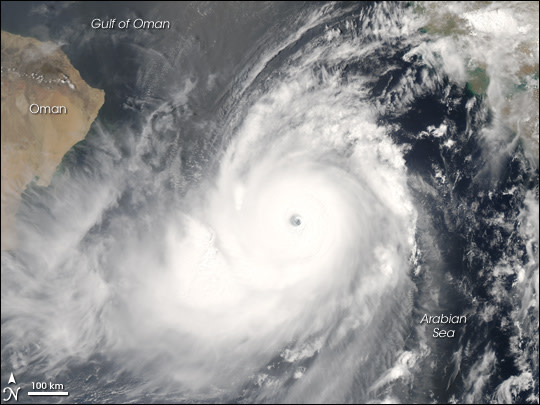 Wikipedia now has a very informative entry on Cyclone Gonu, which has been by far the most surprising and frightening hurricane of 2007 thus far. Gonu's apparent records include:

1. Strongest storm ever recorded in the Arabian Sea (140 knot winds, making Gonu the first recorded Category 5 storm in this region). 2. Tied for strongest storm in the North Indian basin (Arabian Sea and Bay of Bengal). 3. Lowest sea level pressure in the Arabian sea (this is my guess, and it will be estimated from satellite images rather than directly measured; but it stands to reason that Gonu, by far the most intense storm recorded in the Arabian Sea, will also have the lowest pressure recorded). 4. First/strongest recorded hurricane to hit Oman/Gulf of Oman/Iran (we'll have to see where Gonu ends up, but these are all apparent firsts).

This is all pretty incredible; but I want to focus on intensity in particular. You see, across the globe hurricane intensity records just keep toppling in recent years, with Gonu being merely the latest example. One cannot say definitively that global warming is causing this--better measurements and monitoring of storm intensities could also conceivably explain what we're seeing. Still, it's hard not to notice that Gonu closely follows:

1. 2004's Cyclone Catarina, the first known hurricane to form in the South Atlantic and strike Brazil (and thus by definition the strongest recorded storm in this region). 2. 2005's Hurricane Wilma, which at 882 millibars had the lowest central pressure ever measured in the Atlantic basin. 3. 2006's Cyclone Monica, apparently the strongest storm ever recorded in the Southern Hemisphere. 4. 2006's Hurricane/Typhoon Ioke, the longest lived storm at Category 4 intensity or higher, and most intense hurricane ever recorded in the Central Pacific.

Is this all coincidence? In many parts of the world our historical tropical cyclone records are extremely poor...could it be that if they were better, many of these "records" would disappear? I don't know. I can't say one way or another. I can only cite the records and say that they are certainly consistent with the idea that global warming is causing an intensification of the average hurricane.