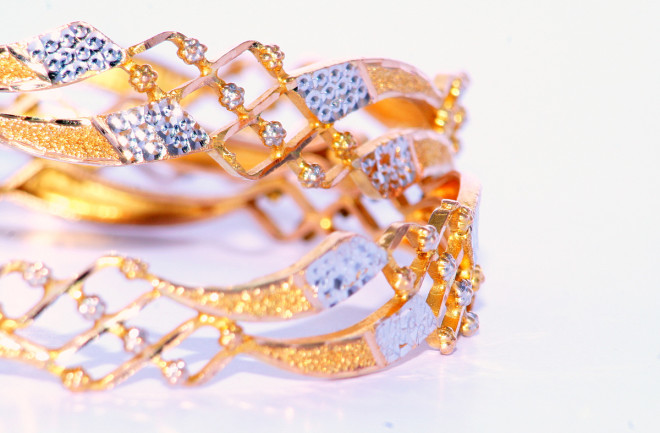 Gold is a modern expression of love, and every Valentine’s Day thousands of shoppers browse boutique windows full of the stuff. Over 90 countries mine the gold that is fashioned into jewelry, with China currently topping the exporter tables (though as illegal exports are rampant in some countries, exact figures are hard to pin down).

South American countries are also major gold producers, particularly Perú, which ranks variously fifth or sixth worldwide. A global gold rush over the last decade has seen a boom in South American mining. But this has led to a specific problem — it is now financially viable to extract gold deposits from areas which were previously unprofitable, such as under tropical forests, resulting in growing damage to one of the planet’s most vulnerable ecosystems.

The global price of gold, as tracked by the World Gold Council, rose from $250 per ounce in 2000 to $1300 for the same amount in 2013. This spike was driven by demand for gold bars following the financial crisis alongside a growing global demand for gold jewelry in the world’s developing economies. That boom has benefited South America, where gold production grew by 30 percent from 2000 to 2010. But it has come with a dark side, as two recent studies show: growing deforestation in the tropical forest and contamination of the area’s vital rivers.

The first study, by a team from the University of Puerto Rico, evaluated forest loss around newly developed mining sites. Researchers examined high resolution satellite data between 2001 and 2013, and concluded that around 650 square miles of tropical forest was lost in South America as a result of gold mining in this period. Crucially, that deforestation was significantly higher during the 2007-2013 period — which the team attributes to the increase in gold prices after the financial crisis.

One of the worst affected areas was the Madre de Dios region of Perú, a highly biodiverse region containing the country’s largest national park. The second study, from Duke University, looked at how the mercury used in small-scale mining in this region is damaging rivers and food chains.

This small-scale or artisanal mining is carried out by individuals or small enterprises, rather than mining companies, and makes use of hand tools to extract and pan for gold. Miners use mercury to bind small particles of gold ore into hard chunks that can be more easily extracted, after which the mercury is burned off with blowtorches. Over 90 percent of these types of mines are illegal according to the researchers.

The Duke team studied mercury concentrations in soil and fish downstream of known artisanal mining sites. They found that miners’ use of mercury not only contaminates local soil and water, it also creates hazardous levels of the neurotoxin hundreds of miles away. Fish found 350 miles downstream of a mining site were found to contain too much mercury to be safely eaten by children and women of maternal age.

There are various tactics being tried to address these problems. Training for miners in South America could improve their practices, says Nora L. Álvarez-Berríos, lead researcher on the University of Puerto Rico study.

“It is important to encourage more responsible ways of extracting gold by helping miners to extract in a more efficient way to reduce deeper encroachment into the forests,” she says.

The gold rush is highly lucrative and miners often migrate hundreds of miles to make money, meaning that for solutions to be effective they need to benefit the miners as well as the environment. Therefore helping miners find alternative and sustainable sources of income is also a priority.

Technical changes could help as well. Álvarez-Berríos advocates for government to work with the artisanal miners to capture or reuse mercury at the site of extraction. And the team at Duke University, led by Professor Helen Hsu-Kim, are already developing technology to better control releases of mercury into the environment, including new filters that will be more effective than the current system at capturing the mercury as it is burned off the gold amalgams.

Meanwhile, projects such as USAID’s Initiative for Conservation in the Andean Amazon are working to mitigate the environmental impact caused by mining and recover areas which have been damaged.

These are solutions being proposed for where gold is mined, but what about where gold is consumed? As we shop for love trinkets this Valentine’s Day should we be reassessing our lust for gold? Alvarez-Berríos thinks so.

“It is important that awareness is raised among gold consumers to insist that the gold purchased has been extracted in a way that does not contribute to serious environmental damage or human rights abuses,” she says.

At the moment there is no independent certification for gold that can guarantee environmental and social standards. There are efforts being made to establish such a system, but in the meantime consumers can only try to ask the right questions when they buy gold jewelry.

Payal Sampat is International Program Director at Earthworks, the organization behind the No Dirty Gold campaign, which aims to highlight the global environmental and social problems that irresponsible gold mining creates.

Sampat suggests that “consumers seeking ethical alternatives to dirty gold should consider vintage or antique jewelry. To minimize the chance your jewelry is tarnished with polluted water or human rights abuses, ask your jewelry retailer if they sell recycled or fair trade metals.”

The No Dirty Gold campaign have also produced a set of Golden Rules, which represent social, environmental and human rights criteria for more responsible gold production. By signing up to the rules, retailers pledge to pursue and encourage cleaner sourcing of gold and other metals. There are now over 100 signatories including Tiffany & Co., and Helzberg Diamonds.

Something to consider as you seek to express your love this holiday.