GM Gets Shafted For Relying on SUVs and Trucks

Detroit's condition is not the kind of thing you want to rub your hands in bloggy schadenfreude over. Blue-collar layoffs have started turning into white-collar layoffs. And when they sell cars that do horrible things to the planet they're just trying to give the American public what it wants. 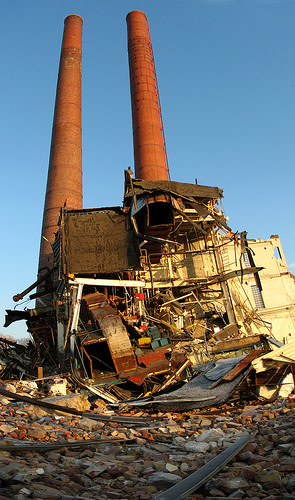 But of course the American public is fickle and freaked out about gas, and so the SUVs and light trucks that used to account for 60% of GM's sales in the USA aren't selling like they used to. As a consequence, GM just posted its 3rd biggest quarterly loss in its history. The leasing of SUVs has taken the biggest hit, because nobody wants to buy the used SUVs anymore--they're now selling at a quarter of their original value. It is tempting to resort to karma talk here. Call me a socialist, but wouldn't it be better for everyone if making catastrophically large ski-transport vehicles was against the rules, so everybody would just stick to the fuel-efficient cars they want whenever there's an oil crisis? This is a pretty clear example of the free market not behaving like the benevolent god libertarians want it to be. More like a spoiled mercurial toddler or a crackhead. Image: flickr/Rick Harris