Last night The Colbert Report gave us one of those episodes that pivot in the middle from comedy to that transcendent, swooning, oh-my-god-real-life-is-more-absurd feeling. This took place when GM Chariman Bob Lutz (pictured below) informed Colbert's fictional persona that 32,000 respected scientists shared his view that climate change is caused by "sunspot activity." 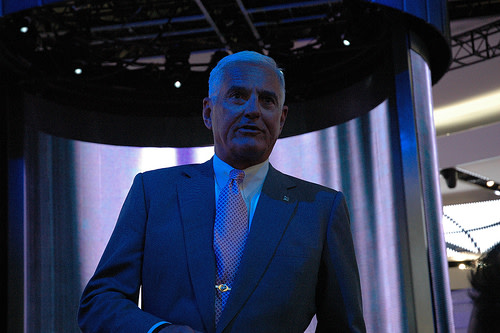 If you're done mourning David Foster Wallace, a literary ally of environmentalism, you might consider getting started on mourning Philip Clapp, who spent his career refuting ridiculousness of the Bob Lutz variety. The United States does not have an environmental lobby the same way it has a tobacco lobby, but Clapp's National Environmental Trust was the closest thing. As its director, he pressured Clinton, Bush, and even Gore, to take serious action on climate change, advocating in vain for the Kyoto treaty. He later moved to the Pew Charitable Trusts, where he lampooned Bush's weak, late, concession to some form of American involvement in an international treaty on emissions. Let's take a moment to remember that environmentalism needs pinstriped Capitol Hill operators with integrity, as well as the rumpled journalists/artists/farmer types.