Last month tied for the warmest April, keeping Earth on track to reach a new, disturbing milestone this year. 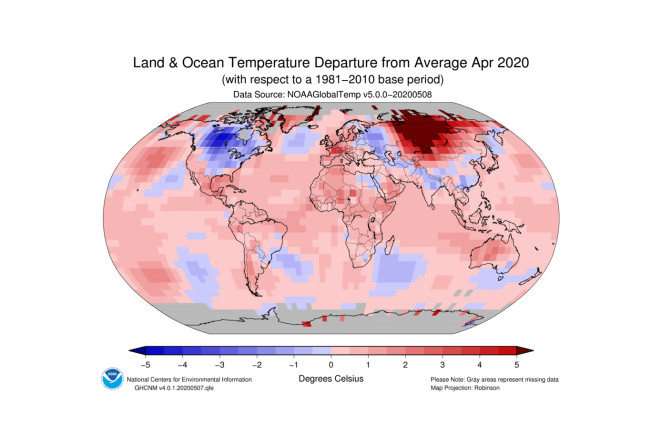 Unusual chill across North America last month was the exception, not the rule. Overall, Earth’s surface temperature in April was 1.91 degrees Fahrenheit above the 20th-century average — the second-highest April temperature in the 141-year record. (Credit: NOAA)

If you live in the eastern two-thirds of North America, it may well have felt like global warming has been on vacation lately, with very chilly weather and even freezes and snowfall extending into May in some places.

But don’t be fooled: For the globe overall, very unusual warmth last month is helping propel the climate in 2020 toward what could well be the warmest year.

Two independent analyses of the global climate in April have now been published, the latest today by the National Oceanic and Atmospheric Administration. The other was released last week by the European Union’s Copernicus Climate Change Service. Both show April’s global average surface temperature as being second-highest in records dating back to 1880. NASA’s own independent analysis should be released soon.

According to NOAA’s analysis, last month also marked the 44th consecutive April — and the 424th consecutive month — with temperatures at least nominally above the 20th-century average. The eight warmest Aprils have all occurred since 2010.

Much of the contiguous U.S. bucked the pattern in April. But that was an exception, not the rule.

For about two-thirds of the contiguous U.S., the month of April was cooler than average. But during March, the temperature pattern was actually reversed from that seen here, with the West trending cool and most of the eastern two-thirds warm. (Credit: NOAA)

The warmth has not been confined to just one month. For January through April, the global surface temperature also tied for second-highest such period in the 141-year record, according to NOAA. At 2.05 degrees Fahrenheit above the 20th-century average of 54.8 F, this value is only 0.13 F less than the record set in 2016.

Each month, NOAA offers an outlook of the global annual temperature ranking at year’s end. It is based in part on how widely the global temperature has varied from month to month. According to the most recent outlook, which takes into account very unusual warmth between January and April, 2020 stands a 99.99 percent chance of coming in as a top five year.

And there is a almost a 70-percent chance that 2020 will end as the warmest year on record.

It’s noteworthy that this year is shaping up as being so warm without a declared El Niño. The phenomenon is characterized by warmer-than-average sea surfaces in the tropical Pacific. El Niño’s impact on sea surface temperatures, and a host of changes to associated climatic patterns, tends to boost global temperatures made warmer on average already by humankind’s emissions of greenhouse gases.

This week, carbon dioxide concentrations in the atmosphere, as measured atop Hawaii’s Mauna Loa, stand at an all-time high of 416.82 parts per million. That compares with 414.32 ppm during the same week in April 2019. (In case you are wondering: No clear impact on atmospheric CO2 has been seen from COVID-19’s hit to economic activity.)

Grandson of ‘The Blob’?

While no El Niño has been declared, a huge and very warm patch of unusually warm water formed in February in the northeastern Pacific. You can see evidence of it in the map of global temperatures at the top of this post.

This very warm patch may be a continuation of an infamous feature known as The Blob, which began forming in May 2019, grew very large and intense by September, and then dissipated in February. (This was actually “Son of The Blob,” following an even earlier one that formed in 2013.)

Scientists call it a marine heat wave, and the most recent one “actually began only a few days after the end of the 2019 event — in roughly the same location as where the 2019 event ended,” says Andrew Leising, an oceanographer with NOAA’s Southwest Fisheries Science Center in La Jolla, California.

“But then, BAM, about three days ago, a storm or big shift in winds, or something drastic, must have happened out there because we saw a radical decline in the size of this current heat wave,” Leising says.

It’s too soon to tell what the future may hold for the northeastern Pacific marine heat wave, and its potential impact. But I’ll be watching that — along with the overall course of 2020’s climatic conditions — and will report back here at ImaGeo soon.