The Dreaded 'Blob' May be Back in the Pacific Ocean 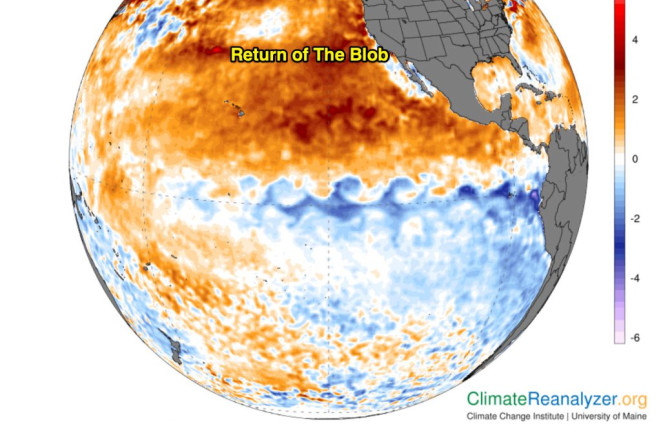 A map of sea surface temperature anomalies shows a blob of very warm water off the West Coast of the North America. (Source: Climate Reanalyzer, University of Maine)

A gigantic area of super-warm water has formed again off the U.S. West Coast, threatening impacts on weather and wildlife

Five years ago, a gigantic cauldron of abnormally warm water in the Pacific Ocean wreaked havoc on marine ecosystems and contributed to drought along the western coast of North America.

Dubbed “The Blob,” it triggered the largest and most toxic algae bloom the region had ever seen, as well as mass die offs of sea mammals and fish.

Now, a new blobby warm patch has quickly formed in the same area.

Stretching across a vast territory — from Alaska to Baja, and from the West Coast to beyond Hawaii — this Son of Blob is almost the same size as the original one. In fact, it’s “the second largest marine heatwave in terms of area in the northern Pacific Ocean in the last 40 years, after ‘the Blob,'” according to the National Oceanic and Atmospheric Administration.

The Blob returns: the abnormally warm sea surface temperatures now seen off the U.S. West Coast look (orange and red colors in the maps above) closely resemble what was seen at this time of year in 2014. (Source: NOAA)

“It’s on a trajectory to be as strong as the prior event,” says NOAA research scientist Andrew Leising.

So far, cold water upwelling along the coast has held the abnormally warm offshore waters at bay. That’s good news for marine life, which tends to be concentrated more along the coast.

But the upwelling typically weakens in the fall. That would allow warm waters to invade coastal areas. Unfortunately, that may already be happening: Abnormally warm water has lately been turning up just offshore from Washington to California.

To show one of the most significant impacts of the original blob, I created the animation above for a 2015 ImaGeo post. Using image data from NASA’s Terra and Aqua satellites, it shows part of the vast, toxic algae bloom that formed as a result of the warm waters.

The animation consists of false and natural-color views of the waters surrounding Vancouver Island, and off the Olympic Peninsula in Washington State. In the false-color view, the yellow, orange and red colors are indicative of relatively high levels of chlorophyll in the water. Like all plants, phytoplankton use chlorophyll for photosynthesis, the process by which they use sunlight for their energy needs.

The other image shows the same scene but in natural color. I fiddled with the contrast to make the greenish and brownish swirls of algae stand out.

If this year’s cauldron of warm water persists, it could bring back algae blooms. Shifts in the marine food web could also have severe impacts on marine mammals.

During the oceanic heatwave that began in 2014, sea lion mothers had to forage for seafood farther from their rookeries than normal. “Hungry pups set out on their own, but many became stranded on area beaches,” according to NOAA.

The return of The Blob could also have broad impacts on weather along the West Coast. A study led by the University of Washington’s Nick Bond showed that the 2014-2016 blob significantly contributed to abnormally warm temperatures in Washington State.

And the Pacific Northwest might not be the only area to be affected.

“This area of the ocean can affect the atmospheric circulation in ways that are important for the climate,” says Noah Diffenbaugh, a climate scientist at Stanford University, quoted in a San Francisco Chronicle story. “Very warm water over the northeast Pacific is a statistical predictor of circulation patterns that tend to promote warm, dry conditions here in California.”

There is, mercifully, one very big difference between the state of the Pacific Ocean this year compared to the way it was when The Blob last wreaked havoc: There’s no El Niño in place.

As you might know, El Niño is characterized by warmer than normal temperatures in a large swath of the tropical Pacific Ocean. And it tends to have significant impacts on the weather in far-flung parts of the world, including the Western United States.

In 2015, we had to cope with the impacts of both The Blob and a Godzilla El Niño — one of strongest El Niño’s on record.

Right now, with the fading 2019’s El Niño, neutral conditions prevail in the tropical Pacific, and they are expected to last through the fall and possibly into the spring of 2020.