The hole's origins may be easier to explain than anyone thought. 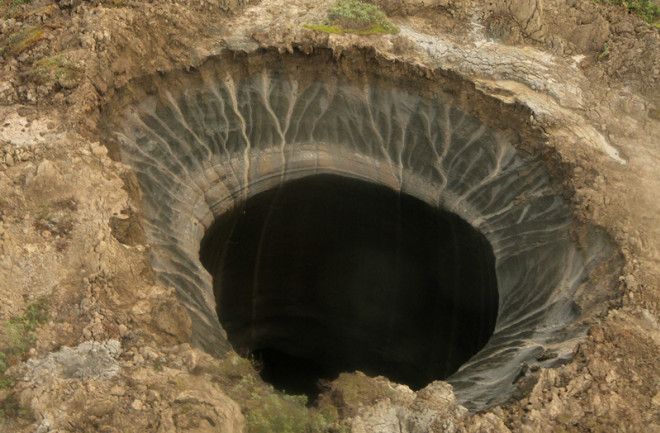 In July, a helicopter pilot flying over arctic Russia’s Yamal Peninsula noticed an odd sight: a roughly 100-foot-wide crater in the permafrost. Images of the crater went viral online, sparking theories of its formation: Was it a meteorite? A missile strike? A botched alien landing?

To solve the mystery, geologist Marina Leibman of Moscow’s Earth Cryosphere Institute and colleagues lowered a chemical sensor into the pit. Near the base of the crater, they detected high concentrations of methane, which they suspect had led to a pressure buildup that caused the ground to burst.

Just where the volatile gas came from is debatable. Some scientists believe the methane may have leaked from natural gas deposits deep below the permafrost, while others, including Leibman, say it likely escaped from the permafrost itself. Either scenario is surprising, since the frozen ground usually traps methane.

It’s unclear if this atypical release is linked to climate change. While ground temperatures in the peninsula have increased about 3 degrees Fahrenheit since the 1970s, permafrost temperatures are still below zero, so thawing may not account for the methane release, Leibman says.

At least one other similar crater has been found in the area, and there’s concern that the next chasm could topple nearby oil and gas facilities, or even homes. “It’s very possible that this process will expand over this territory,” Leibman says.

[This article originally appeared in print as "Methane at Bottom of Siberian Crater Mystery."]