Friday Eye Candy: Thunderstorms from Below and Above 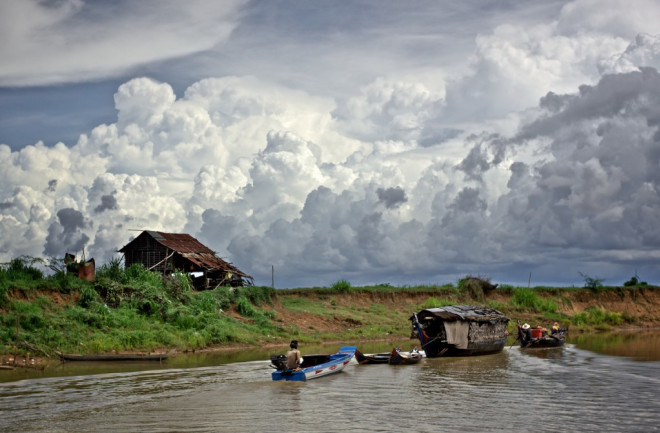 Monsoonal thunderstorms boil up over the Sangkhé River in Battambang Province, Cambodia on June 4, 2013. (Photograph: © Tom Yulsman) The monsoonal weather pattern here in Colorado gave me the idea of doing a Friday eye candy post on thunderstorms. I've taken countless photos of clouds, and the picture above is one of my favorites. I shot it while on a boat trip on the Sangké River between Siem Reap (near the Angkor temple complex) and Battambang in Cambodia. These thunderheads boiled up in the sweltering heat and humidity, forming gargantuan ramparts. About half an hour later we huddled under a canvas shroud over the boat as torrents of rain beat down. I thought I'd also try to find imagery of thunderstorms over Asia shot from orbit. And I knew right where to look: Karen L. Nyberg's Twitter feed. Sure enough, I struck gold:

Bursts of lightning illuminate a line of storms moving across Asia, as photographed by astronaut Karen L. Nyberg from the International Space Station. (Photograph: Karen Nyberg/NASA) Nyberg is an astronaut on the International Space Station, and her photographs of Earth just make me happy. She shot this one on July 24th somewhere over Asia. It shows glittering city lights and lightning popping off in a line of thunderstorms. Here's her original Tweet about it. As I write this, clouds are forming over the mountains west of me. If anything interesting happens, I'll be out there with my camera.