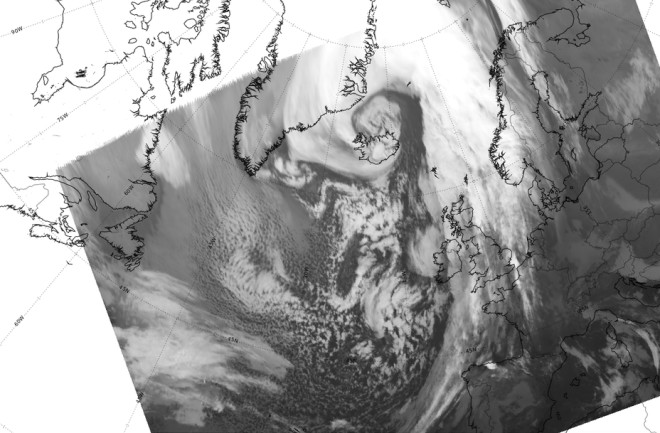 So-called "Storm Frank" over Iceland in December 2015. (Credit: Icelandic Met Office) The height of last winter – from December through February – was the warmest on record, shattering monthly marks for the least Arctic ice seen since satellite observations began in the 1970s. And now a new study in an American Meteorological Society journal shows how those temperatures combined with an unusual storm system to wreak havoc on the Arctic sea ice pack. As seasons change and Earth’s northern axis tilts away from sun, ocean water freezes into sea ice around the pole. But many regions remained ice-free later than normal last winter. And for the Barents and Kara Seas, the region north of Scandinavia and Russia, the freeze-up came some two months late, leaving a brittle ice pack. Then, as people were celebrating holidays in the final moments of 2015, a cyclone started forming in the North Atlantic Ocean. The cyclone pushed its way toward the United Kingdom, then intensified as it moved passed Iceland and along Greenland’s east coast, reaching the central Arctic on New Year’s Eve. This Arctic cyclone brought freakishly warm and moist air around the North Pole, pushing winter temperatures above freezing.

“Similar events have happened before, but this 2015/2016 event had a lot more energy than all these other extreme events, by a long way,” says Alek Petty, a sea ice scientist at the University of Maryland and NASA’s Goddard Space Flight Center.

The storm drew headlines at the time, and the climate scientists say that prompted them to take a closer look at what happened. Using data from NASA’s Atmospheric Infrared Sounder instrument, their research shows how this warm blast shed several inches of sea ice thickness on average around the Atlantic side of the Arctic. Some regions lost more than a foot of ice. AIRS hadn't documented such an event in more than a decade of observations, and there are few quality atmospheric records before that. And even after the storm passed, relatively hot and humid weather remained in the Arctic, which made it harder for more ice to form. The authors point out that ocean temperatures play a much larger role in determining what happens to sea ice over the entire winter. However, cyclones are the main driver of winter heat that’s transported into the Arctic – there’s no winter sun — and scientists are still trying to determine if such storms are becoming more common. And as the Arctic continues to flirt with record low winter ice, it’s likely that the polar cap will become ever more brittle, making it more vulnerable to these kinds of storms.

“The Arctic is a lot warmer and wetter — more humid — than it used to be,” Petty says. And that humidity could make it easier for cyclones to find their way into the Arctic from lower latitudes, but it’s an open question scientists are still trying to answer.

*Editor’s Note: This story has been updated from its original version to clarify that scientists are still trying to understand humidity’s role in Arctic cyclones.