Found: Primordial Magma From the Hot Dawn of the Earth 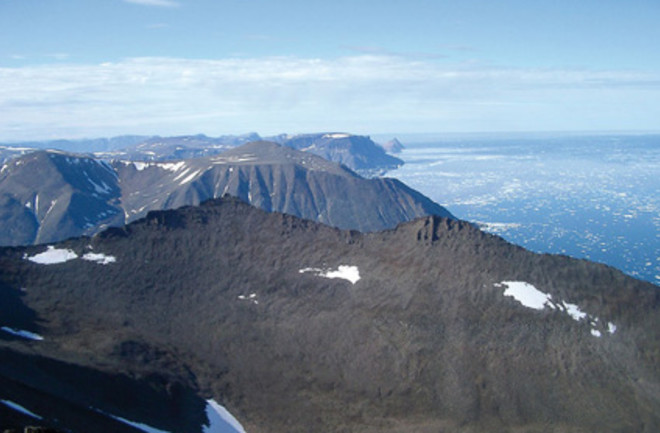 Way up in the Great White North, beneath Canada's Baffin Island, lies material from the very beginning of the planet. The search for primordial stuff—rocks that have survived 4.5 billion years since the formation of the Earth without being changed by forces that shook and scrambled our planet—is one of geology's long-running quests. In Nature this week, Matthew Jackson says he may have done it. Jackson's team found lava rocks in Canada with a signature that matches that of the newly formed Earth, suggesting there is material below the snowy surface that has endured unchanged throughout the planet's history.

They have the highest proportion of the isotope helium-3 relative to helium-4 of any rocks known. This suggests that the rocks came from a "primitive" region of Earth, as, unlike helium-4, helium-3 can't be replenished and thus must have come from the original building blocks of the planet. What's more, the ratio of two isotopes of the element neodymium match what geochemists would expect for a residue from Earth's early ocean of molten magma [ScienceNOW].

It's the magma pocket deep in the Earth's interior that's thought to be an unchanged remnant of the early, molten Earth, not the lava rocks it produced: Curiously, the surface rocks are only about 60 million years old. So if Jackson's team is correct, this pocket of primordial mantle still fueled eruptions recently (in geologic terms). That's a surprise:

"Even if a vestige of such material remained, it seems unlikely that it would be found in any samples from Earth's surface or the shallow subsurface that are available to geologists," observed David Graham of Oregon State University in Corvallis, who wrote a commentary in the same issue of Nature. "Yet that is what (this) new evidence suggests" [Discovery News].

What goes on deep down in the Earth is, as you'd imagine, difficult to prove. So after the question of whether Jackson is correct, there's the question of how this primitive material survived and ended up where it did.

But regardless of how it happened, this ancient sample of the planet's internal makeup will provide important information to geologists trying to piece together the early history of the Earth and its inner workings, Graham said [Los Angeles Times].

80beats: Why Chile’s Massive Earthquake Could Have Been Much Worse

80beats: A Legit "Young Earth" Theory: Our Planet May Be Only 4.4 Billion Years Old