A new open-source atlas could keep you from falling into a sinkhole and help settle the great Arctic land grab. 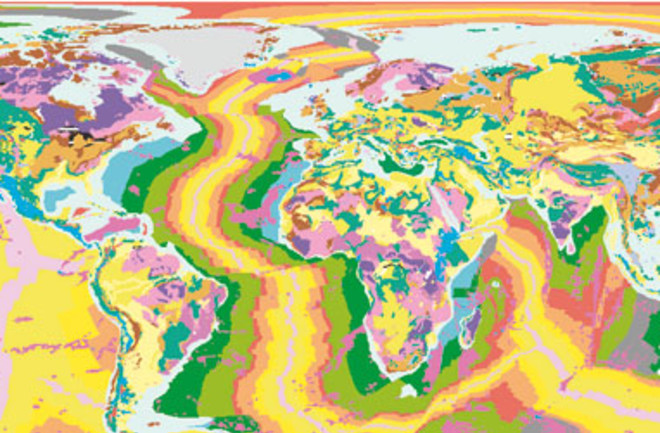 OneGeology is a United Nations for geologists—or, more to the point, a go-to online cooperative for rocks. Unveiled on August 6 at the 33rd International Geological Congress in Oslo, Norway, OneGeology is the world’s first international open-source online geologic data­base. At first glance it may look like little more than an interactive global map on a Web site, but behind its flashy appearance is an open-source platform with a growing list of participating countries, 87 at last count, all sharing detailed data that deliver unique portraits of the world’s rock makeup.

“OneGeology aims to take all geologic data everywhere and put it on the Web, leveling the playing field for everybody,” says Ian Jackson of the British Geological Survey, the project coordinator for OneGeology. “This is not just an exchange of knowledge; this is a worldwide scientific collaboration.” While much of the project involves the geohistory of our planet (see the chronostratigraphic world map, opposite), it is also about the oil that runs our cities, the borders that divide our countries, the water that quenches our thirst, and the soil that grows our crops.

You Say Quaternary, I Say NeogeneThe biggest challenge facing geologists in the 21st century is making sense of geologic data gathered by countries that use different standards and definitions. For instance, the United States Geological Survey (USGS) says the Quaternary period started 1.6 million years ago, while the International Commission on Stratigraphy says 1.8 million to 2.6 million. Ask a geologist to define sandstone and the definition will change depending on where that geologist practices. When information is shared across borders, different standards are used, compiled in different programs that are written in different languages—all creating an indecipherable puzzle for geologists.

Here’s where new technology—in the form of a common programming language—can save the day. OneGeology makes use of GeoSciML, the geologic mapping program that is the standard for the International Union of Geological Sciences. This international platform for a common computer language helps make all the standards transparent, even if geologists don’t agree on each other’s definitions.

Gold Mines and WaterwaysAny story of our natural resources can be told with the right geologic map. Some rock formations point to underground waterways; others suggest diamonds below. This sort of information has proved invaluable for countries throughout the world—from the Middle East, flooded with oil and natural gas, to marble-rich Italy. For countries without established geologic organizations, OneGeology provides free access to a gold mine of accurate data. “Established geologic authorities in the developed world have been mapping resources for years, and we’ve made mistakes all along,” Jackson says. “Why let others make mistakes? We can make quality information Web accessible within a week.”

While OneGeology is not likely to make a small country rich with newfound oil or minerals, it could do wonders for sustainable development. Water is one invaluable natural resource linked to local geology. Underground aquifers can be identified by aboveground formations, helping officials bring cleaner water to people by pointing out where not to place a landfill or dispose of toxic waste. Minerals and elements found in underground rivers that feed bigger bodies of water can affect water quality. Arsenic-tainted waterways in Bangladesh, for example, are a geologic problem that may be better addressed with more detailed maps. Crops, too, can benefit from maps. The types of rock below the soil can affect the quality of food grown there. And countries lying on fault lines, near active volcanoes, or in mudslide-prone areas will all benefit from the best, most up-to-date information on their local geology.

Reviewing Data in a Wiki WorldOneGeology provides a universal language for communication among countries. Even so, the accuracy of the information may be called into question. “Some who argue for wikis? say, ‘If it’s wrong, it gets corrected,’?” says Peter Lyttle, program coordinator for the USGS National Cooperative Geologic Mapping Program. “That isn’t good enough for the USGS.” For now OneGeology accepts official data only from national geologic organizations, but Jackson foresees universities, private organizations, or even the public submitting their data in the not-too-distant future. “If a professor publishes a paper that advocates a change to a geologic name or definition, this could be an important part of the process,” Lyttle says, cautioning, “It is a university’s role to challenge the USGS, but it muddies the waters.”