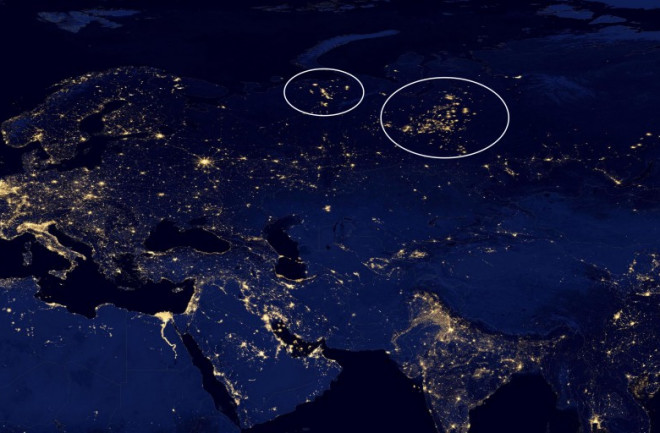 A nighttime view captured by the Suomi NPP satellite stretching from Western Europe at left to East Asia at right. In addition to the lights from cities, flaring gas in Siberian oil fields are clearly visible in the circled areas. (Source: NASA Earth Observatory/NOAA NGDC) As Russian forces have taken complete control of the Crimean Peninsula, little action to counter this violation of Ukraine's sovereignty seems forthcoming from the nations of the North Atlantic Treaty Organization. At least for now. As the Wall Street Journal reported yesterday:

European heavyweights like Germany and France appeared to rule out any moves that might lead to a widening confrontation with Russia, such as military action or even economic sanctions.

Even a boycott of the upcoming Group of Eight summit in Sochi, site of the recent Olympics, doesn't seem to be in the cards. Why the reticence to take even mild steps to counter Vladimir Putin's invasion of a sovereign nation? Several factors are at work, including Russia's integration with Western economies. And if you want to understand that particular fact on the ground, you should follow the carbon. Start with the image above. Captured by the Suomi NPP satellite, it shows Eurasia at night. In addition to city lights, you can see the bright glow generated by flaring natural gas in the vast Siberian oil and gas fields. (In the circled areas.) Here's a close up view of Russian energy development in Siberia acquired during the day by the Landsat satellite:

A Landsat view of Siberian oilfields near Noyabr'sk acquired on June 18, 2012. The tan colors show what appear to be a network of roads and well pads. The dark areas are ponds and marshes. (Source: USGS) Russia is the world's second-largest producer of dry natural gas, and the third largest producer of liquid fuels, according to the U.S. Energy Information Administration. The country holds the world's largest natural gas reserves, with 1,688 trillion cubic feet. That amounts to about a about a quarter of the world's total proven reserves, most of which are in Siberia. As for oil, in 2012 Russia had roughly 7.2 million barrels total liquid fuels available for export every day. Where's all that stuff going? Have a look:

As the WSJ article puts it:

Countries ranging from Italy to the Czech Republic count on Russian supplies for their energy security. Germany, the bloc's economic powerhouse, is the biggest importer of Russian gas, which covers just under a third of Germany's overall gas needs, and is Russia's third-largest trade partner. German companies had $22 billion in direct investments in Russia in 2013.

Energy and trade help explain Germany's reluctance to impose economic sanctions on Russia. But it takes two to tango: Oil and gas revenues accounted for 52 percent of Russian federal budget revenues and over 70 percent of total exports in 2012, according to the EIA. I'm a science journalist with a penchant for visual communication, not an expert in geopolitics. But I'm thinking that with Russia and much of Europe — especially Germany — joined at the hip like this, the economic risks that Putin would run from further military adventures in Ukraine would mount significantly. So I'm betting this is as far as he'll go. Of course this assumes that economic considerations will trump others. They may not. As Julia Ioffe put it in the New Republic

. . . Putin and those around him are, fundamentally, terminal pessimists. They truly believe that there is an American conspiracy afoot to topple Putin, that Russian liberals are traitors corrupted by and loyal to the West, they truly believe that, should free and fair elections be held in Russia, their countrymen would elect bloodthirsty fascists, rather than democratic liberals. To a large extent, Putin really believes that he is the one man standing between Russia and the yawning void. Putin's Kremlin is dark and scary, and, ultimately, very boring.

What that might mean for further developments in Ukraine is your guess as good as mine. But while you're guessing, make sure to follow the carbon.