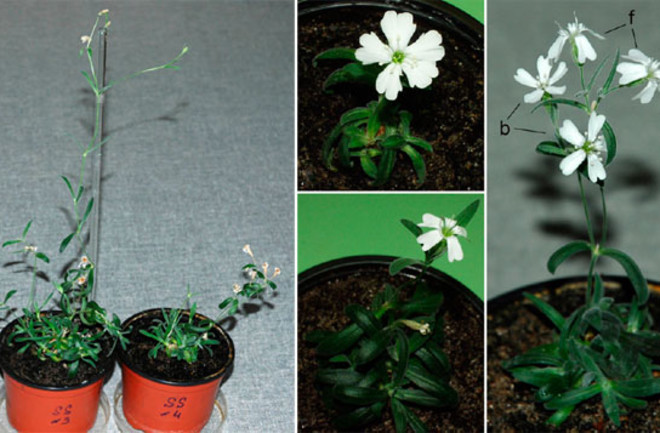 Fruits in my fruit bowl tend to rot into a mulchy mess after a couple of weeks. Fruits that are chilled in permanent Siberian ice fare rather better. After more than 30,000 years, and some care from Russian scientists, some ancient fruits have produced this delicate white flower.

These regenerated plants, rising like wintry Phoenixes from the Russian ice, are still viable. They produce their own seeds and, after a 30,000-year hiatus, can continue their family line.

The plant owes its miraculous resurrection to a team of scientists led by David Gilichinsky, and an enterprising ground squirrel. Back in the Upper Pleistocene, the squirrel buried the plant’s fruit in the banks of the Kolyma River. They froze.

Over millennia, the squirrel’s burrow fossilised and was buried under increasing layers of ice. The plants within were kept at a nippy -7 degrees Celsius, surrounded by permanently frozen soil and the petrifying bones of mammoths and woolly rhinos. They never thawed. They weren’t disturbed. By the time they were found and defrosted by scientists, they had been buried to a depth of 38 metres, and frozen for around 31,800 years.

People have grown plants from ancient seeds before. In 2008, Israeli scientists resurrected an aptly named Phoenix palm from seeds that had been buried in the 1st century. But those seeds were a mere 2,000 years old. Those of the new Russian flower – Silene stenophylla – are older by an order of magnitude. They trump all past record-holders.

Svetlana Yashina from the Russian Academy of Sciences grew the plants from immature fruits recovered from the burrow. She extracted their placentas – the structure that the seeds attach to – and bathed them in a brew of sugars, vitamins and growth factors. From these tissues, roots and shoots emerged.

Yashina potted the plants and two years later, they developed flowers. She fertilised the ancient flowers with each other’s pollen, and in a few months, they had produced their own seeds and fruits, all viable. The frozen plants, blooming again after millennia in the freezer, seeded a new generation.

S.stenophylla is still around, but Yashina found that the ancient plants are subtly different to their modern counterparts, even those taken from the same region. They’re slower to grow roots, they produce more buds, and their flower petals were wider.

This is the first time that anyone has grown plants from seeds tissue deeply buried within permanently frozen burrows. But it’s not the first time that someone has tried. In 1967, Canadian scientists claimed that they had regenerated Arctic lupin from 10,000 year old seeds that had been buried by lemmings. But in 2009, another team dated those same seeds and found that they were actually modern ones, which had contaminated the ancient sample.

Mindful of this mistake, Yashina carefully checked that her plants were indeed ancient ones. She dated the seeds directly, and her results matched age estimates from other samples from the same burrow. The burrows have been buried well below the level that animals dig into, and the structure of the surrounding ice suggests that they have never thawed. Their sediments are firmly compacted and totally filled with ice. No water infiltrates these chambers, much less plant roots or modern rodents. There are a few pores, but they are many times narrower than the width of any of Yashina’s seeds.

This closed world provided shelter, a continuous chill, and an effectively dry environment, that allowed the fruits to persist. At subzero temperatures, their chemical reactions slowed to a crawl. Extreme age was no longer a problem.  A fruit’s placenta is also chemically active, and is loaded with several chemicals that might have protected these specific tissues against the cold.

But the burrows weren’t completely benign environments. The underground rocks contain naturally radioactive elements, which would have bombarded the seeds with low but accumulating doses of radiation. The ones that Yashina regenerated would have amassed 70 Grays of radiation – that’s more than any other plant has absorbed while still producing viable seeds.

S.stenophylla’s resurrection shows how many treasures lie buried within the world’s permafrost. This soil, defined as that which stays below freezing for two years or more, covers a fifth of the planet’s land. It is home to bacteria, algae, fungi, plants and more. In the fossil burrows that Yashina has studied, scientists have found up to 600,000 to 800,000 seeds in individual chambers.

In Norway’s Svalbard Global Seed Vault, scientists have frozen thousands of seeds in an underground cavern, as a back-up in case of agricultural crises. But nature has already produced similar frozen seed banks. Siberia, Alaska and the Yukon could act as one massive freezer, where ancient life has been stored, waiting to greet the world again.

Update: The lead author, David Gilichinsky passed away on 18 February, just two days before his final paper was published.

The 13,000-year old tree that survives by cloning itself