Fire's Ebb and Flow Across the U.S. 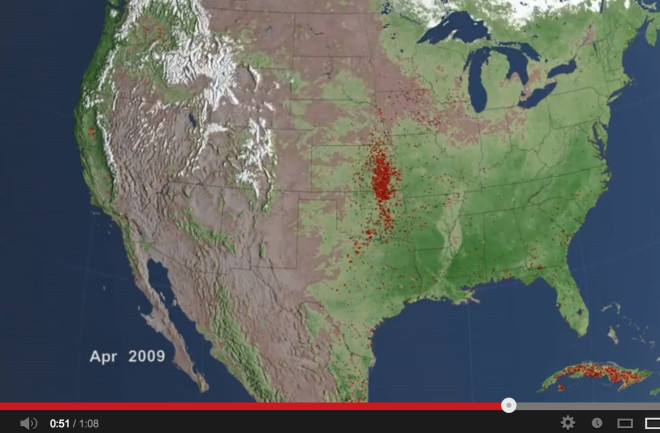 A screenshot of an animation showing annual fire activity, along with changes in vegetation and snow, over the United States from July 2002 through July 2011. Click on the image to see the animation. (Image: NASA Goddard Space Flight Center) After the Springs Fire in California's Ventura County exploded to 28,000 acres on Friday, cooler temperatures overnight have helped firefighters begin to coral it. According to the L.A. Times, it is now 30 percent contained, and continued progress is expected. Yesterday, I posted some images of the fire captured by satellites. They're pretty dramatic, so have a look. While searching for a followup, I found this animation from NASA, showing the ebb and flow of fire across the United States from 2002 to 2011. Composed of imagery from the Terra and Aqua satellites, it also shows snowpack and changes to vegetation as the seasons come and go. Most prominent in the animation are the waves of fire that sweep across the heartland. These agricultural fires are mostly deliberately set. Less prominent are the wildfires in the West. And here's something I did not know: "North America is a region where fires are comparatively rare," according to NASA. "North American fires make up just 2 percent of the world's burned area each year."