Evolution of a Hurricane-Force Storm in the North Atlantic 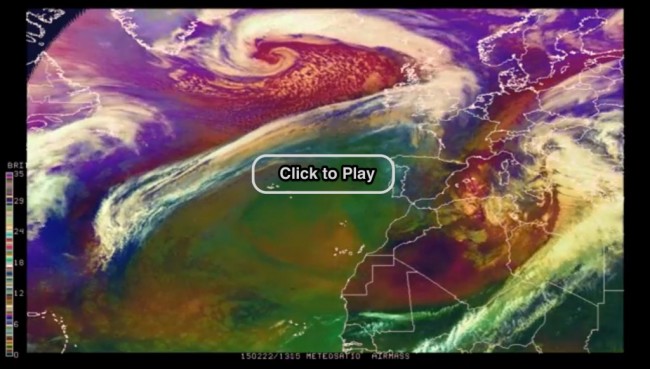 A low pressure system in the North Atlantic that evolved into hurricane-force storm last weekend brought gale force winds and high waves to the United Kingdom and Ireland Sunday and yesterday. On satellite imagery, the storm looks pretty dramatic, so I thought I'd share some of what I've found. The image above is a screenshot from a video showing the evolution of the storm. The false-color images comprising the video come from a Meteosat weather satellite. This particular remote sensing product is used to monitor the evolution of cyclones, in particular rapid cyclogenesis. Here's a description from the Ocean Prediction Center of the National Weather Service:

The low is shown intensifying east of Greenland, and the imagery indicates a stratospheric intrusion with the deep red and purple shading near the low center. This is a sign of strong winds aloft mixing down toward the surface. The system is then shown moving off to the east into Europe. 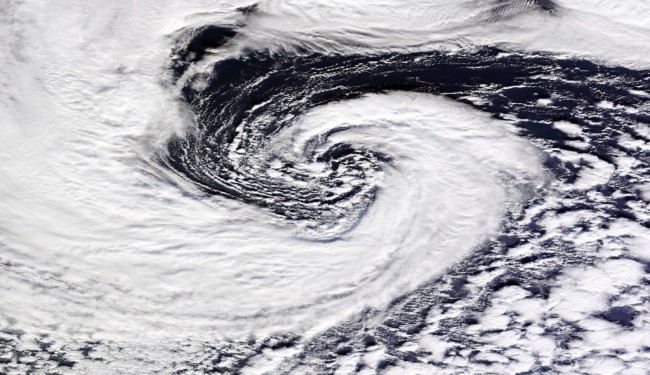 Source: NASA Worldview This closeup, true-color view of the hurricane-force storm swirling between Greenland and Iceland was acquired by NASA's Aqua satellite on Sunday (Feb. 22). Lastly, here's a broader view from Aqua, acquired the same day: 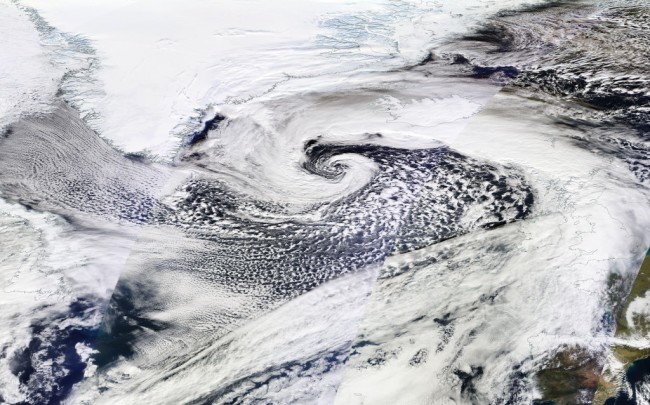 The images I've posted here from Aqua were produced using data gathered by an instrument aboard the satellite called the Moderate Resolution Imaging Spectroradiometer, or MODIS. The satellite is in a near-polar orbit, which accounts for those rather sharp delineations in the image above. Those lines and the accompanying differences in image tone reflect the orbital track of the Aqua satellite as MODIS was gathering the data that went into constructing this image. In January, I visited a ground station in Tromsø, Norway, where much of the data produced by Aqua, and its twin, Terra, are received. I'm hoping to write a post at some point about some of these behind the scenes details. I find them fascinating (but of course I would, since I'm obviously a remote sensing geek!).