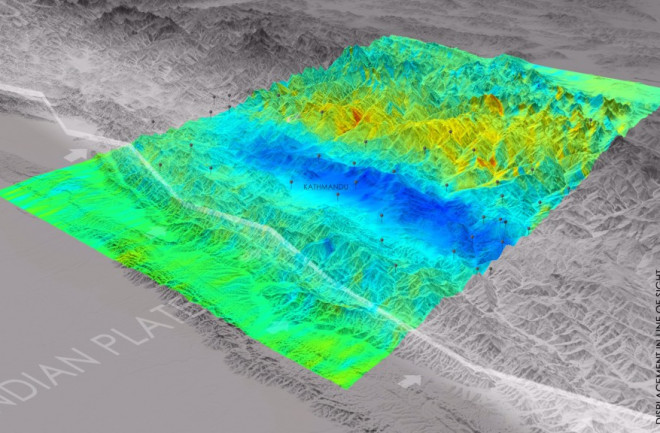 Changes in elevation and position that occurred as a result of the April 25, 2015 earthquake in Nepal are depicted in this image based on satellite data. Areas in blue were uplifted by about 2.5 feet. (Source: DLR) One aspect of the magnitude 7.8 earthquake that rocked Kathmandu and surrounding areas in Nepal became dramatically evident almost immediately: The violent shaking caused monuments and an estimated 70,000 homes to come crumbling down. More than 6,000 people have died as a result, and survivors are still being pulled out of the rubble.

Source: USGS Since the quake on April 25, I've been waiting to hear about another effect — one that is not so obvious from the ground: How much did the quake deform the crust in this part of the world. After all, the collision of the Indian and Eurasian tectonic plates, which began 50 million years ago, has been responsible for the upthrust of Mt. Everest and the world's tallest mountain range, the Himalaya. We've just started to get an answer, thanks to data from Europe's Sentinel-1A radar satellite. Scientists from DLR, the national aeronautics and space research agency of Germany, have used that data to create the image at the top of this post, which reveals how much the land in and around Kathmandu moved in relation to the satellite in orbit. The map is a bit counterintuitive, in that you'd think the blue colors, covering a swath about 60 miles long and 19 miles wide, would represent areas that dropped. Actually, the opposite is true. The blue shows land that was thrust skywards by up to 2.5 feet, or 0.8 meters. (The negative numbers in the key indicate that this is how much the distance between the ground and the satellite decreased along the satellite's line of sight.) In the blue area, horizontal movements of up to 6.5 feet, or 2 meters, may have also occurred. Meanwhile, the yellow and reddish colors in the mountainous areas to the north of Kathmandu indicate areas that subsided as a result of the quake.

Source: USGS Also note the jagged gray line on the map. This is the boundary between the Indian Plate, which is pushing northward as indicated by the arrows, and the Eurasian Plate. As the Indian Plate moves north, it burrows its way beneath Eurasia — in slow motion, of course. And also in fits and starts, because of friction between rocks. (Click the thumbnail at right for thumbnail illustrations of this process.) That friction resists the inexorable push of the Indian Plate, causing it to get hung up. When sufficient strain accumulates, rocks give way along fault lines. That's exactly what happened underneath Nepal on April 25th. The sudden release of energy caused the ground to shake violently — and also thrust parts of the landscape upwards while other areas subsided. It's important to note that the analysis is preliminary. More scientific detective work will be needed to precisely quantify how Earth's crust was deformed by the quake.