Emperor Left Out in the Cold as Other Penguins Get U.S. Protection 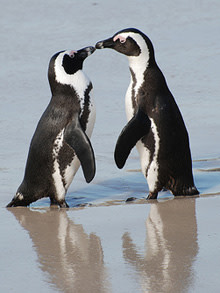 "There are certainly issues with those species, but we did not believe at this time that the populations were reduced or that there were significant threats to lead us to make a determination that they are threatened with extinction," said Kenneth Stansell, deputy director of the Fish and Wildlife Service [AP], the government agency responsible for the decision.

The "threatened" species include the yellow-eyed penguin, white-flippered penguin, Fiordland crested penguin, Humboldt penguin, erect-crested penguin, and some populations of southern rockhoppers; the "endangered" species is the African penguin. The birds' habitats range from Antarctica to Peru to South Africa. None of the species are native to American soil, so their new status will have little direct bearing on U.S. policy. But listing

the penguins under the act will raise awareness about the species and could give the U.S. leverage in international negotiations to protect them from fishing, habitat loss, development and other threats [AP].

These species will join the polar bear, which was recognized as "threatened" earlier this year, as some of the first species to be officially protected because of threats from global warming.

The decision comes after several years of legal wrangling between the U.S. government and the Center for Biological Diversity, a wildlife advocacy group that had originally sought protection for a dozen penguin species because of the impacts of global warming and other environmental threats [ABC News]. A court order set today as the deadline for the decision. Wildlife groups say the new rules, which still need to be approved by the incoming Obama administration, are not enough. Recent research by penguin expert David Ainley suggests that a two degree rise in global temperatures would cause enough ice melting to wipe out 50 percent of emperor penguin colonies on Antarctica.

But the government said there was insufficient evidence to list the emperor as threatened at present, citing uncertainty over climate change predictions [Telegraph].

The Center for Biological Diversity is considering going to court to fight for the slighted emperor penguin. Brendan Cummings of the center said,

"This is [a] species that is most ice dependent, that is likely to be most impacted by global warming...Refusing to take action on the emperor penguin equates to business-as-usual climate policy from the Bush administration" [ABC News].