Scientists disagree about how long our planet has sportedthe magnetic armor that makes it habitable. 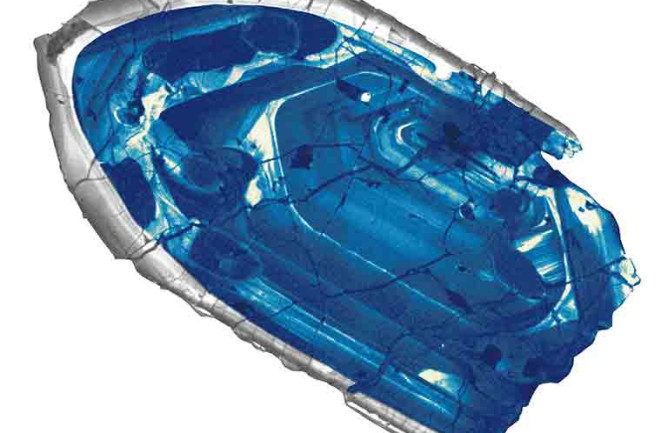 A close-up of a zircon crystal, a type of mineral belonging to the group of nesosilicates. | John Valley/University of Wisconsin-Madison

Sign up for our email newsletter for the latest science news
Zircon crystals found in the Jack Hills of Australia could preserve the earliest evidence of Earth's magnetic field. | E.B. Watson/Rensselaer Polytechnic Institute

The sun spews energetic particles that can pry life-sustaining molecules from our atmosphere, but Earth’s magnetic shield, which originates from the planet’s hot core of churning, liquid iron, shoos those particles away. Scientists disagree, though, about how long our magnetic field has been around, keeping the planet habitable. Until recently, the best guess was that Earth’s magnetic armor was 3.45 billion years old. Now, in Science Smackdown, we look at two recent arguments on whether current evidence points to it being even older.

A close-up of a zircon crystal, a type of mineral belonging to the group of nesosilicates. | John Valley/University of Wisconsin-Madison

A research team led by John Tarduno of the University of Rochester in New York went to Australia’s Jack Hills and collected ancient samples of rock containing the crystallized mineral zircon. Once zircon cools below a certain temperature, roughly 1,085 degrees Fahrenheit, the iron-bearing minerals inside freeze in a tableau, like little soldiers aligned with the planet’s magnetic field. The older the crystals, the older the tableau, and the older the magnetic field.

Tarduno contends that the Jack Hills’ zircon is 4 billion years old, according to radioactive dating, and that nothing has unfrozen and rearranged its magnetic alignment since. That means the magnetic field is also at least that old and has swaddled Earth almost since the planet’s birth, just half a billion years before that.

The Magnetic Field Is (So Far) Just Very Old:

Another group, led by MIT’s Benjamin Weiss, collected rocks from the same area of the Jack Hills but says the zircon, although old, may not have been magnetized billions of years ago. Weiss’ team found that the rock conglomerate the zircon crystals were in had been magnetized just 1 billion years ago, when it probably formed as part of a volcanic eruption nearby. That means the zircon crystals within likely lost their former magnetic direction and recorded the magnetic field during the volcanic event that made the rock. That “remagnetization” would mean even if Earth’s magnetic field existed 4 billion years ago, there’s no evidence left to prove it.