Dumping Iron Into the Ocean Might Not Save the Climate, After All 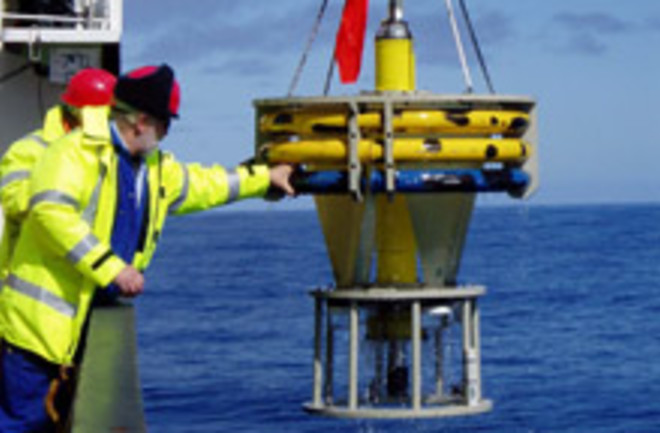 One of the most controversial geoengineering schemes that has been proposed to slow the course of global warming, ocean fertilization, received mixed reviews from a new study. The idea involves dumping iron into the ocean to nourish plankton and spur enormous blooms, which would then die off and fall to the sea floor, bringing the carbon dioxide they'd absorbed with them. Now, researchers studying natural plankton blooms near Antarctica have new evidence to fuel the debate over the efficacy of the process, and whether or not it can get our planet out of hot water.

Scientists took measurements around the Crozet Islands, where there are naturally occurring fluxes in iron levels. To the north of the islands levels of iron are boosted each year as iron-rich volcanic rocks are eroded and the nutrients are carried off by the current [Times Online].

Researchers observed a huge plankton bloom there that covered an area the size of Ireland and lasted for more than two months, while also studying the water to the south of the islands, where the prevailing ocean currents don't carry dissolved iron and therefore plankton blooms don't form naturally. The results, to be published tomorrow in Nature [subscription required], showed

that iron-enriched waters do, as hoped, encourage more carbon to be stored on the ocean floor. But the efficiency of artificial iron fertilisation could be as much as 50 times lower than previous estimates [New Scientist].

three times as much carbon falls to the sea floor beneath a bloom as in "clear" waters. Sediment cores taken from the sea floor suggest the carbon stays there for thousands of years [New Scientist].

But as the quantity of trapped carbon was still considerably less than the estimates produced by some geoengineering proponents, researchers say the study raises serious questions about whether ocean fertilization can help mitigate global warming. Some experts say that artificial schemes could have a more dramatic effect, and that experiments are an obvious next step. Such arguments have immediate relevance because a team of German and Indian scientists aboard a research ship in the Southern Ocean are currently preparing to dump 20 tons of dissolved iron overboard. The experiment generated controversy because some scientists believe the iron's effects on the marine ecosystem aren't fully understood. However, marine scientist Andrew Watson says the new study should put critics minds at ease, as it shows that

"much larger amounts of iron are being added daily by natural processes around the Crozet Island, and it doesn't seem to have done the Antarctic ecosystem any harm" [The Guardian].