Can we bury enough carbon in the oceans to curb global warming?

About 15 years ago marine scientist John Martin delivered a legendary quip: "Give me half a shipload of iron and I will give you an ice age." During his tenure at the Moss Landing Marine Laboratories near Monterey, California, Martin became convinced that iron stored in ocean waters played a critical role in climate change. Shortages of iron appeared to curtail the growth of floating marine organisms called phytoplankton, which need the metal to make enzymes. Martin said that if iron-poor regions were "fertilized" with supplements, plankton would flourish and, through photosynthesis, scarf up enough carbon dioxide from the surface water to curb global warming trends. Martin had formulated his "Geritol hypothesis" to solve a mystery of basic ocean ecology. But when experiments conducted after his death in 1993 showed that iron-poor waters do in fact bloom with algae when enriched, entrepreneurs embraced the idea as a way to get paid for drawing carbon dioxide out of the atmosphere. Now recent field tests measuring long-term carbon storage in fertilized waters have yielded discouraging results. "It looked pretty promising, like it wouldn't take much iron or ocean area to have an impact," says marine chemist Ken Buesseler of the Woods Hole Oceanographic Institution in Massachusetts. "But people hadn't been measuring how much carbon would get into the deep ocean." When it comes to locking up carbon, deeper is better. Phytoplankton blooms are confined to surface waters, where they have access to sunlight. Carbon dioxide from the atmosphere dissolves in the ocean, and the organisms use it for photosynthesis. During that process, oxygen atoms are freed, and carbon becomes a building block of solid organic matter. But the carbon "fixed" in this manner can easily leak back into the atmosphere when, for example, predators munch on the phytoplankton and then respire carbon dioxide. If the carbon is to remain in solid form, it has to sink below the surface layer, where all the action takes place. That mixing layer may go as deep as 1,000 feet or more, Buesseler says. Only the heaviest particles of carbon-rich matter will fall beyond that: clumps of dead plankton cells, the bodies of deceased predators, and the predators' fecal pellets. "People always made the assumption that if you got a bloom, you'd get a pretty efficient transfer of carbon into the deep ocean," Buesseler says. Instead, plankton ecosystems are ferociously efficient at recycling carbon—as much as 95 percent of it stays at the surface. "It's this continuous cycle: Something grows, something eats it, something else grows, something eats it. . . . That means the carbon isn't sinking out." So Buesseler wasn't entirely surprised when, in the largest fertilization trial held to date, he recorded levels of sinking carbon that were only one-hundredth of those predicted by models and geoengineering plans. Two earlier experiments in the same part of the world had shown no difference at all in the amount of carbon "exported" from fertilized and unfertilized waters. "Ocean iron fertilization may not be a cheap and attractive option if impacts on carbon export and sequestration are as low as observed to date," Buesseler concludes in a recent report with oceanographer Philip Boyd of the University of Otago in New Zealand. Buesseler's data came from a 28-day observation near New Zealand called SOFeX, short for Southern Ocean Iron (Fe) Experiment. The Southern Ocean—the body of water surrounding Antarctica below 50û south latitude—is a favorite locale for fertilization tests because its waters are depleted in iron but rich in other nutrients like nitrogen, phosphorous, and silicon, which feed phytoplankton. While river sediments and wind-borne dust carry ample stocks of iron into most of the world's oceans, three areas of the Pacific are isolated from dust-laden winds—the Southern Ocean, a portion of the central Pacific, and some subarctic waters. Oceanographers puzzled for decades over why these regions didn't support robust plankton communities and teeming fisheries. Martin figured out that they were anemic. Scientists conducted the first field experiments to test Martin's theory in the mid-1990s. Iron dissolved in a weak acid solution was dribbled into 23 square miles of open ocean west of the Galápagos Islands. These and subsequent experiments often produced dramatic results: Phytoplankton blooms were sometimes conspicuous enough to show up in satellite images. The fate of the carbon they'd fixed, however, was never clear.

The ocean is a natural sink for carbon—C on the periodic table, with an atomic weight of 12.01. Microorganisms take in carbon dioxide, other organisms eat them, and the carbon-based detritus of this massive food web falls to the seafloor. Photographby John Clark 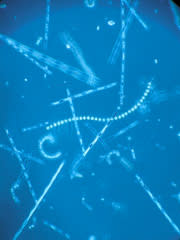 Varieties of Pseudo-nitzschia (about 500 micrometers, or .02 inch, long) grow in chain-forming colonies. They flourish when some ocean regions are seeded with iron—a strategy that might reduce atmospheric levels of carbon dioxide.

"It's actually very difficult to measure the amount of carbon that sinks into the deep ocean," says Buesseler. "And I'm not saying that just because I do it." Buesseler used a technique that measures the relative abundance of the radioactive element uranium and its decay product thorium. The two radioisotopes should exist in a constant ratio in ocean water. But thorium sticks to carbon particles and sinks. So a decrease in thorium relative to uranium in surface waters can act as a proxy for the amount of sinking carbon. Buesseler says his latest measurements show that burying just 30 percent of the carbon released annually as a result of human activities would take a million SOFeX-like iron dumpings over an area of marine real estate "more than an order of magnitude larger than the entire area of the Southern Ocean." Sallie Chisholm, an ocean ecologist at MIT, says Buesseler's numbers are just one more reason in a long list she keeps on why iron fertilization should not be scaled up for commercial purposes. "You can't deduce the consequences of large-scale fertilization from small-scale experiments," she says. "You can't learn the long-term status of carbon or the impact of sustained fertilization." She says it's sure to change the structure of the food web—it has to change the food web in order to work. Fertilization could also generate greenhouse gases more potent than carbon dioxide. Methane, for example, is released when phytoplankton decompose. In a letter to the journal Science, atmospheric scientist Mark Lawrence of the Max Planck Institute for Chemistry in Mainz, Germany, notes that phytoplankton blooms also produce dimethyl sulfide, which alters cloud cover, and methyl halides that erode the ozone layer: "The possibility of unintended climate and atmospheric change . . . is a crucial argument against ocean fertilization." 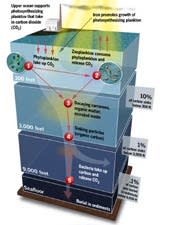 Adding iron to iron-poor ocean areas promotes the growth of marine life, which, in theory, draws more carbon dioxide out of the atmosphere. One problem with the strategy is that carbon appears to be recycled so efficiently in the marine food chain that only a very small percentage of the carbon ends up sequestered in ocean sediments. Graphic by Don Foley

Martin warned of such consequences. "The biggest danger, in my view," he wrote in 1990, "is that large-scale iron fertilization will occur without the necessary understanding of just what will happen on scales ranging from single cells to ecosystems." Fertilization businesses such as Virginia's GreenSea Venture Inc. and the Planktos Foundation of California remain optimistic about the technique's prospects. Through a protocol established in 1997 at the United Nations Framework Convention on Climate Change in Kyoto (which the current U.S. administration does not support), firms could sell carbon "credits" to polluters in exchange for sequestering carbon by injecting carbon dioxide into underground reservoirs, say, or by planting trees. Early projections suggested that ocean fertilization might be the cheapest of all these schemes. Planktos hopes to charge $4 for every ton of carbon it puts in the ocean—although there is still no standard for determining the amount of carbon buried. And despite SOFeX's lackluster results, some scientists think ocean fertilization could still be the best hope for disposing of the 6.5 billion tons of surplus carbon dioxide that humanity releases into the atmosphere each year. "We're heading toward climate conditions that Earth hasn't experienced in millions of years," says marine chemist Ken Johnson of the Monterey Bay Aquarium Research Institute. "That to me is pretty scary. We can't afford to ditch any potential solutions just now." Johnson says that conditions during the expedition were far from ideal for sinking carbon. The Antarctic waters were much chillier than usual, and 50-knot winds howled every day, slowing phytoplankton growth. The SOFeX crew had to leave before the plankton bloom had spent itself. "The bloom was increasing linearly when we left and may have continued for months," agrees Ken Coale of Moss Landing, the scientist in charge of SOFeX. "We didn't quantify it completely." But with the expedition's three vessels costing more than $21,000 a day and nearly 100 scientists on board, "nobody has the ship time to observe these throughout their entire course." Richard Barber, an oceanographer who studies computer models of fertilization outcomes at Duke University's Marine Laboratory in Beaufort, North Carolina, calls iron fertilization "the world's most successful mitigation process." But he wonders about the long-term fate of sequestered carbon: Even if it sinks, will it stay sunk? Deep-sea currents typically draw buried nutrients back to surface waters. Barber's models show that if carbon doesn't fall deep enough, it could resurface in less than a century. And to be most effective, large-scale ocean fertilization would have to be continuous. "How do you fertilize all the iron-poor oceans every five days?" he says. "I just don't think it will work." Even if marine scientists disagree on iron fertilization's prospects as a cure for global warming, they are unanimous about its value as a tool for studies of ocean ecology. Those studies are more urgently needed than ever, says Coale, if only to chart the potential effect of large-scale commercial fertilization before it happens. Coale thinks it's unfair, if not impossible, to expect the oceans to absorb more than 6 billion tons of excess carbon each year. "There are many of us who consider the oceans to be sacred," he says. But "we've let the cat out of the bag. We have to keep looking at it now, whether we like it or not." 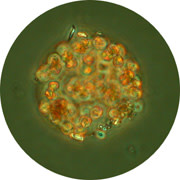 Phaeocystis is one of the microorganisms that thrived in an iron-enrichment experiment in the Southern Ocean. The phytoplankton can grow alone or in gelatinous colonies.

The Web site of the Planktos Foundation, one of the businesses pursuing iron fertilization, has basics about the process and its potential: www.planktos.com.