Dramatic satellite video shows fire and smoke from roaring blazes across more than a million acres of the U.S. West 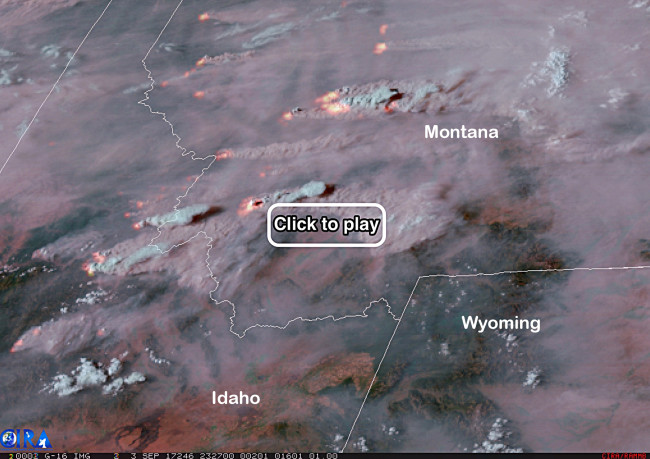 Smoke and heat from raging wildfires in Idaho and Montana are seen in this animation of satellite images acquired on Sept. 3, 2017. (Source: RAMMB/CIRA)

Note: I've updated this story to clarify and expand on the role of human-caused climate change in western wildfires. See below.

As of this afternoon, 77 large fires are burning across 1.4 million acres in eight western U.S. states. That's an area more than three times the size of Houston. The burning is part of a long-term trend of increasing wildfire in the West, brought on by a variety of factors, none more significant, according to recent research, than human-caused climate change. Hardest hit by fire right now is Montana, with 26 large wildfires blazing today across 662,105 acres, according to the the National Interagency Fire Center. The animation above, consisting of imagery acquired by the GOES-16 weather satellite on September 3, 2017, shows enormous amounts of heat rising many of those fires, detected in the infrared, along with massive plumes of smoke. Smoke from the fires has been smothering vast swaths of territory. I've been looking at a variety of satellite imagery and to my eye it seems that smoke from the western U.S. fires (possibly mixed with smoke from Canadian wildfires) has blown all the way across North America, out over Greenland and across more than half of the Atlantic Ocean. The following animation of imagery, also acquired by GOES-16, shows the extent of the smoke as day broke across North America today. I've circled the smoke in the screenshot. Click on the image to watch the animation. The smoke turns up in something of a salmon color: 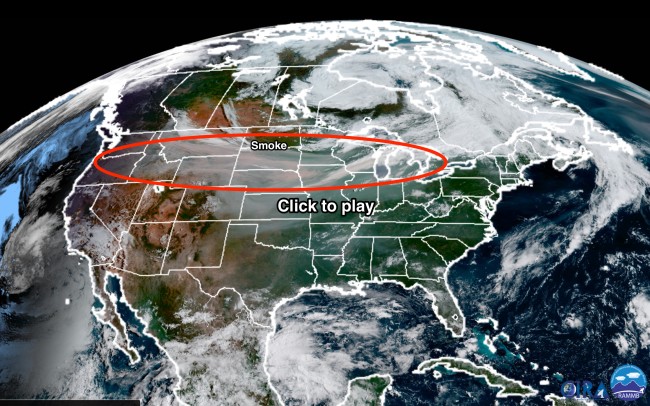 An animation of GOES-16 satellite imagery acquired early on Monday, Sept. 4, 2017, shows huge amounts of smoke blowing across much of North America. (Source: RAMMB/CIRE) If you look in the upper right corner in the animation, you might be able to spot some smoke blowing out over the Atlantic. In the next animation, covering the past six days, you can watch the progress of the smoke across North America and out into the Atlantic:

This animation shows satellite measurements of aerosol amounts in the atmosphere over North America and the North Atlantic Ocean between Aug. 30 and Sept. 4, 2017. (Source: NASA Worldview) The animation is created using data acquired by the Moderate Resolution Imaging Spectroradiometer, or MODIS, on NASA's Terra satellite. It shows aerosols in the atmosphere, with redder tones indicative of higher concentrations. These tiny particles can come from a variety of sources, including dust, sea salts, volcanic ash, pollution – and smoke from wildfires. As you watch the animation, follow the red as it spreads across the continent and then out into the Atlantic south of Greenland (which is visible in the upper right). The first frame, acquired on Aug. 30th, and the last frame captured today (Sept. 4), linger longer than the others. If you're wondering why the last frame shows only a small part of North America, that's because as I'm writing this post on Monday afternoon, Terra has not yet imaged the rest of the continent. Here's a before and after view over the Atlantic from the Meteosat-10 satellite showing what I think is very likely smoke from the wildfires:

An animation consisting of Meteosat-10 satellite images acquired on Aug. 29 and Sept. 3, 2017. (Source: EUMETSAT) This imagery consists of data acquired in the visible and near-infrared part of the electromagnetic spectrum. In these kind of views from Meteosat-10, smoke typically appears in bluish tones and is more visible in the early morning or late evening. The images in this animation were acquired as evening approached on Aug. 29 and Sept. 3, 2017. In the Aug. 29th view, a faint light-bluish cast can be seen below Greenland's southern tip. By Sept. 3, the bluish cast, which I've circled in red, is far more pronounced. I've been personally affected today: I had to bag my run this morning here in Niwot, Colorado because of particle pollution from smoke blowing in from the west. It was so bad that the Rocky Mountains, normally visible from near my house, were totally obscured.

A mosaic of iPhone photos looking west from Niwot on Feb. 19, 2017 (Image: © Tom Yulsman) The photo-mosaic above shows the view from a trail near my house on a day when the atmosphere was free from smoke. The foothills of the Rockies are clearly visible on the horizon (with a beautiful elongated cloud above them). And here's the view from this morning: 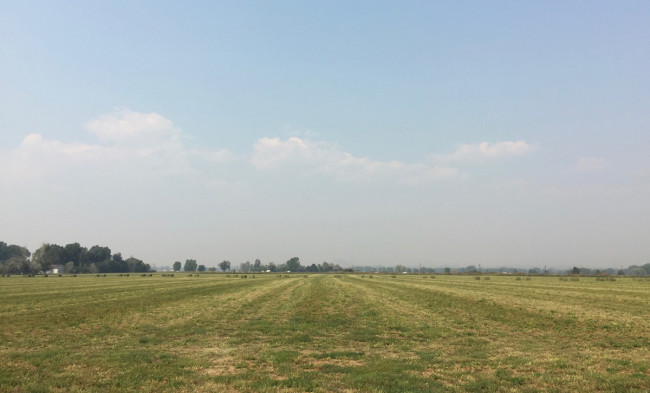 Smoke from western wildfires visible in Niwot on Sept. 4, 2017 (Photo © Tom Yulsman) This one is just a single photo, not a mosaic of several like the previous image. But it was taken in roughly the same spot. As you can see, no mountains are visible. And in this case, seeing is believing – as today's air quality map for the Denver area shows: 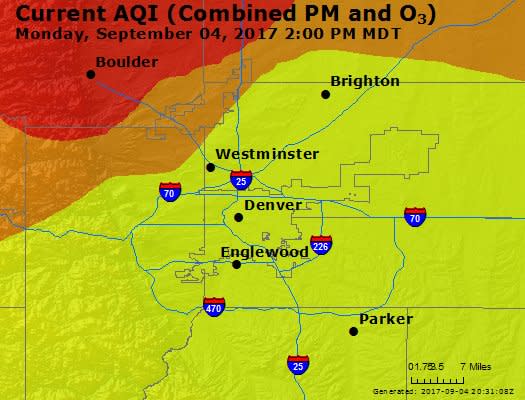 The air quality map for the Denver area as of the afternoon of Sept. 4 2017. The red area shows where air quality was unhealthy for all people, and dangerous for those with heart or lung disease, older adults, and children. (Source: AirNow EPA) I live in the red zone, near Boulder. Because the air quality has been so bad, I decided to write this post. (With all the windows closed...) I should add that I've seen conditions like this when wildfires were burning closer to home, in western Colorado. But never this bad from fires that are 800 miles and more away. 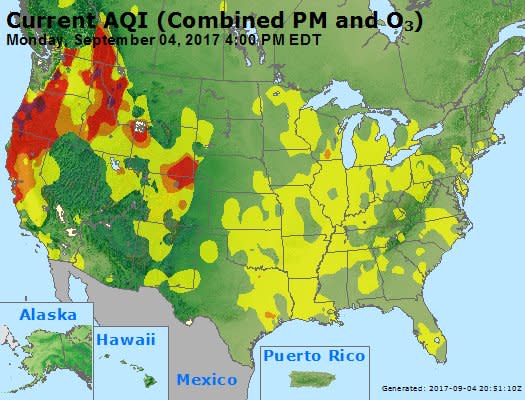 Air quality map for Sept. 4, 2017 at 4 p.m. EDT. (Source: AirNow EPA) This isn't just some isolated pocket of bad air. Millions of people across the West are being affected, as the national air quality map above shows. Since the beginning of this year, 46,951 fires have burned across 7,650,844 acres of the United States, according to the National Interagency Fire Center. For the prior 10 years (2006-2016), the annual average has been 5,488,788 acres. So eight months through 2017, we've already beaten the average for an entire year by nearly 40 percent. And we still have quite a ways to go before fire season ends — if it ends... Research shows that wildfire activity in the western United States has increased dramatically, thanks to our emissions of greenhouse gases. Among the latest research is a study published last year in the Proceedings of the National Academy of Sciences. The findings were summarized in a news release from Columbia University's Earth Institute:

. . . human-induced climate change has doubled the area affected by forest fires in the U.S. West over the last 30 years. According to the study, since 1984 heightened temperatures and resulting aridity have caused fires to spread across an additional 16,000 square miles than they otherwise would have—an area larger than the states of Massachusetts and Connecticut combined. The authors warn that further warming will increase fire exponentially in coming decades.

This year's fire behavior may be just a foretaste of what's to come.

From the research paper, published in the journal PLOS ONE in 2014:

| Update 9/7/17: The original version of this story said that the burning "is part of a long-term trend of increasing wildfire in the West, brought on by human-caused climate change." Since I wrote that, people have rightly pointed out that other factors have contributed to a rise in wildfire activity. So I've modified my story to acknowledge that.

But while it is certainly true that fire suppression in particular has made some forests prone to burning more severely, research shows this is not true of all forest types. Far from it. Here along the Front Range of Colorado where I live and work, for example, research has shown that the severity of modern forest fires is not very different from that of fires that occurred in the region before fire suppression began affecting our forests. One exception are some low-elevation ponderosa forests. But these very much are the exception, not the rule, according to the research, conducted by a team of scientists that included my University of Colorado colleague Tom Veblen.

Recent large wildfires in the Front Range are not fundamentally different from similar events that occurred historically under extreme weather conditions.

So, you might ask, if fires in these forests aren't more severe, what's the fuss? The answer is that severity has increased in some forests — and also that wildfire severity isn't the only factor we should care about. Duration of the fire season, the number of fires, and the size of fires are other really important factors. And all are increasing, thanks to climate change, more than any other contributing factor. A paper titled "Climate-induced variations in global wildfire danger from 1979 to 2013," published in 2015 in the journal Nature Communications, found that fire weather seasons have lengthened across 25 percent of Earth's vegetated surface, resulting in nearly a 20 percent increase in the global mean fire weather season length. The research also showed a doubling in the area of the globe's burnable area that has been affected by long fire weather seasons, and an increased frequency of long fire weather seasons across 53 percent of the planet's vegetated surface during the second half of the study period. In the western United States, human-caused warming has caused snowpack to melt-off earlier than it used to. My colleague Michael Kodas, deputy director of the Center for Environmental Journalism at the University of Colorado (I am the director), discusses the impact this has had on wildfire in his new book, "Megafire." He quotes Steve Running of the University of Montana as saying that "the snowpack really kept a lid on the fire danger." And as Kodas puts it, "The earlier melting of mountain snowpack is largely responsible for the extended fire season in the mountains of the West." Recent research also shows that the overarching influence on wildfire behavior in recent decades – the one that has had a bigger impact than any other — is human-caused climate change. As I mentioned above, a paper published last year in the Proceedings of the National Academy of Sciences showed that human-caused climate change has actually doubled the area affected by forest fires since 1984. Here's more from that study:

Although numerous factors aided the recent rise in fire activity, observed warming and drying have significantly increased fire-season fuel aridity, fostering a more favorable fire environment across forested systems. We demonstrate that human-caused climate change caused over half of the documented increases in fuel aridity since the 1970s and doubled the cumulative forest fire area since 1984.

I linked to the study higher up, but here it is again: http://www.pnas.org/content/113/42/11770.abstract So, yes, human-caused climate change isn't the only factor at work. Forest management does play a role. So does natural climate variability, such as ENSO – El Niño and La Niña. But the research I've cited, and other studies as well, show that in recent decades, no factor has played a bigger role than human-caused climate change. |