Dramatic Evolution of Hurricane Joaquin Captured By a Rapid-Scanning Satellite 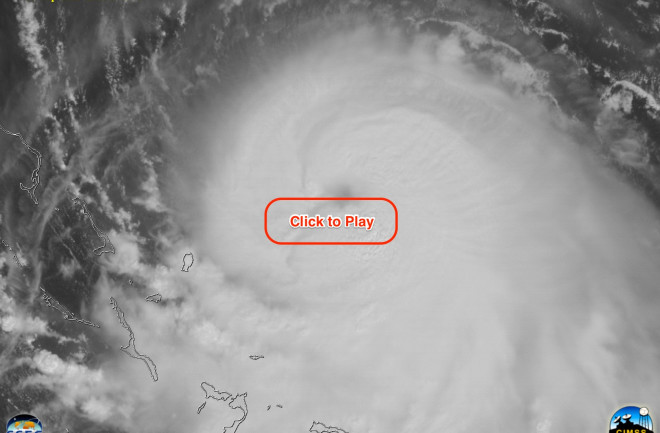 The GOES-13 weather satellite documented the evolution of Hurricane Joaquin during Sept. 30, 2015. (Source: Cooperative Institute for Meteorological Satellite Studies) Drawing energy from record-warm waters at the surface of the Atlantic Ocean, Hurricane Joaquin has grown into a dangerous Category 3 storm with sustained winds of 115 miles per hour. You can watch it's evolution during Wednesday in the animation above, from the Cooperative Institute for Meteorological Satellite Studies. The animation consists of images from the GOES-13 weather satellite. Ordinarily, the satellite acquires an image about every 15 minutes. But for the animation above, the satellite was put into "rapid scan" mode, which meant that it captured an image of the storm every five to seven minutes. I think you'll agree that the result is quite dramatic — a highly detailed view of the storm's dramatic evolution, almost minute by minute. As I'm writing this late on Wednesday night, Joaquin is bearing down on the Bahamas. Its center is expected to move "near or over portions of the central Bahamas on Thursday," and then the northwestern part of the Bahamas Thursday night or Friday, according to the National Hurricane Center. Joaquin is also expected to intensify, with peak winds of 140 miles per hour forecast for Thursday night. Until today, Joaquin's track was highly uncertain. Now, most computer model runs show Joaquin making landfall in North Carolina or southern Virginia on Sunday night. There is one outlier: the ECMWF model, which takes Joaquin out to sea with no landfall in the United States. It can't be discounted because unlike other models, it correctly forecast the very unusual and dramatic left turn that deadly Hurricane Sandy took before pummeling New Jersey and New York in 2012. In the next 12 hours, forecasters should get a better fix on what is likely to happen.

Probabilities of sustained surface wind speeds equal to or exceeding 39 mph, which is tropical storm force. (Source: National Hurricane Center) Despite the remaining uncertainties, residents of the Carolinas and Virginia would be wise to make plans for strong winds that could knock out power, high storm surges, torrential rainfall, and flooding. The map above shows the forecast for precipitation out to five days. Note that 9.4 inches over North Carolina. That's a whole lot of rain.