Chemicals and pollutants are just about everywhere in our environment. And the pace of evolutionary change in our bodies appears to be too slow for humans to adapt to them. 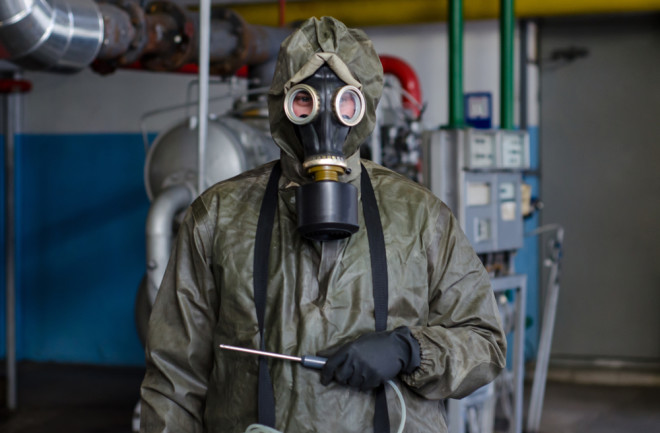 To live in the modern world is to swim in a sea of human-made chemicals, many of them toxic. And the results of that swim aren’t pretty. Air pollution can cause respiratory and cardiovascular problems. Chemicals leached from old batteries can cause renal disease. Mercury from coal-fired power plants and carbon monoxide from vehicle exhausts can cause reproductive problems. And this is a much abbreviated list of today's environmental hazards.

However, some animals adapt to environmental pollutants. Take, for example, a population of Atlantic killifish (Fundulus heteroclitus). These finger-sized minnows, sometimes called mudfish, live in some of the most polluted waters in the country. But these animals managed to survive, even thrive, thanks to some beneficial mutations that allowed them to adapt surprisingly fast to an environment that killed off many other species.

This lucky population of killifish is probably an outlier, however. These little minnows have more genetic diversity than your average fish — or most other animals for that matter. Still, one wonders: Could what worked for killifish work for humans? Could we, at some point, develop resistance to the chemicals that put us in danger today?

Several modern examples illustrate how humans are indeed still evolving. Sarah Tishkoff is professor of genetics and biology at the University of Pennsylvania and Director of the Penn Center for Global Genomics and Health Equity. Her lab studies genomic variation and human evolution, particularly in Africa.

When it comes to evidence of modern evolution, Tishkoff points to the example of lactose tolerance. Studies of DNA from 40,000 years ago up to a few hundred years ago show that there has been a very rapid rise of the genetic variant that helps humans consume milk as adults, something called lactose tolerance. The variant didn't become common until the past 1,000 to 2,000 years, at least, maybe even within the past several hundred years. “When you’re talking about evolutionary time scales,” says Tishkoff, “that’s like a flash.”

An even better example, she says, might be infectious disease. Malaria kills almost half a million people every year, particularly in sub-Saharan Africa. But some people never get the illness, thanks to a mutation that confers resistance to malaria. “Undoubtedly, even today, people who have genetic variants that give them some protection from malaria are going to survive, and their children who don't have those variants are likely not going to survive,” says Tishkoff. “To me, that’s a really clear cut case of ongoing evolution.”

So, yes. Humans are still evolving. But the chances that we’ll be able to outrun pollution in the same way as malaria are slim.

For one thing, evolution takes a long time. As Tishkoff points out, hundreds or even thousands of years is a blink when it comes to evolutionary change. Even if humans could evolve resistance to some chemicals, it’s not likely to make a difference soon, if ever. Who knows what the world or the environment will be like in a thousand years?

But more disturbing — for those counting on an evolutionary solution to protect us — is the malaria example mentioned earlier. If a child inherits two copies of the gene with the mutation that protects against malaria, one from each parent, rather than just one, it can cause a devastating illness, sickle cell disease. Absent extremely good health care, a child with sickle cell disease is not likely to survive childhood.

This give-and-take aspect of genetic mutations is common. “Many mutations effect numerous traits or aspects of physiology,” says Tishkoff, something called pleiotropic effects. Some of the effects are favorable, and some are not. “For example, some of the variants that often play a role in detoxification also play an important role in metabolizing drugs,“ she says. “You could imagine that these chemicals that play a role in getting rid of toxins could also impact things like drug response.”

In any case, at the rate we’re going, humans might just outrun our own evolution. Emily Monosson is a toxicologist, author and member of the Ronin Institute. She did some of the early work on killifish and has written widely about the need for toxicologists to take evolution into account when studying the effects of environmental pollution.

She points out that the pace of evolution is “glacially slow” compared to the pace of cultural and technological change. She also offers an important reminder for anyone hoping to just let nature take its course when it comes to pollution. In her book Unnatural Selection: How We Are Changing Life Gene by Gene she wrote, “I worry not only about species, but about individuals.”

In other words, even if humans could, somewhere way down the evolutionary road, evolve resistant to the chemical soup we live with, there could be a lot of suffering and death along the way. It seems like cleaning up the mess we’ve created, rather than just hoping evolution will save us, is the wiser bet.