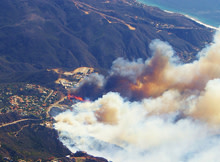 Once again it appears that sometimes, trying to suppress large forest fires might be creating unintended negative consequences. Last month we wrote that fighting fires in the pine forests of the American West could actually decrease the amount of carbon the forest could sequester by allowing smaller trees to survive, and thus compete with the larger trees that absorb most of the CO2. Now, a new study says that huge, raging fires can be the best weapon to get rid of pesky and damaging invasive species in California's chaparral. John Keeley and colleagues at the U.S. Geological Survey studied about 250 fires in the California chaparral, a particularly fire-prone shrubland. When blazes ignited in areas that possessed plenty of fuel because they had not burned in many years, Keeley says, the enormous fire that resulted would kill off invasive grasses, while native grasses recovered afterward. The researchers say this happens mostly because invasive plants aren't adapted to survive the fires, while native California grasses are not only accustomed to the heat, but many also use fires as a cue to germinate. Keeley's idea that chaparral fires should be allowed to burn unless they pose high risk to human life isn't a universally popular one, especially as more and more property development occurs near these forests. But in 2001 Keeley argued that the kind of controlled burns forest managers currently use couldn't prevent huge fires, and in the new study he concludes that suppression strategies could be sparing invasive species. Still, the effects of fire—and the effectiveness of trying to combat them—can vary greatly from forest to forest. For example, fierce fires in the Pacific Northwest could have the opposite effect, actually helping invasive species by giving them more open space in which to thrive. So while firefighters have to step in if a blaze threatens someone's house, whether or not they should try to extinguish forest fires likely depends a lot on the forest.