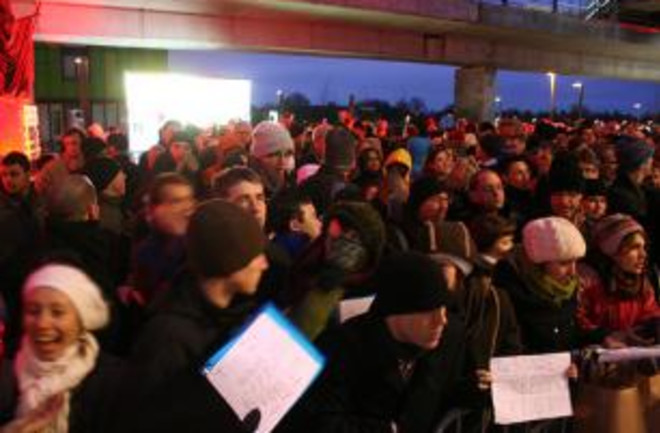 Man. The stories out of here about how hard it is to get into the Bella Center--home to the COP15 meetings--are enough to convince anybody not to try it. That includes me--even though media credentials are waiting for me inside the building. But listen to Catherine Brahic of

describe her experience of the lines outside:

The scene was repeated at the various gates to the Copenhagen climate conference, from 7 am this morning to when the doors closed at 6 pm. I waited five hours in the blistering cold to get in, and I was among the lucky ones. My colleague, Fred Pearce, waited nine before the gates were shut before his nose. Above him a digital sign fastidiously counted the growing number of climate refugees around the world. He'll have to do it all again tomorrow.

What was behind the monumental screw-up? A staggering inability to do maths.

The conference centre has a maximum capacity of 15,000, yet NGOs alone were allowed to register 20,000 delegates. That's not counting the 5000 members of the media, nor the 7000 staffers who are running the place, totalling 32,000 before you even get to the people who are meant to be doing the real work here: the negotiators. There were ministers hopelessly waving their diplomatic passes in the queues outside. They weren't let in any faster than anyone else.

Amanda Little of Grist adds to the depictions of utter misery

On my first day in Copenhagen, after a sleepless red eye, I and thousands of others—including delegates, business leaders, and other accredited journalists—were prevented from entering the conference center because the event has been way overbooked. Word is that more than 45,000 people have registered to attend, but only 15,000 can actually fit into the event location. You do the math. Many of us had paid thousands of dollars and traveled thousands of miles to get here. Despite the miserable weather, lack of food and toilets, and obvious mismanagement of the proceedings, U.N. officials seemed unable or unwilling to deal with the problem.

My co-sufferers had some choice words to describe the situation: “Profoundly miserable.” “The day of the living dead.” “The slowest torture imaginable.” I arrived at 1:30 p.m. and left at 5:30; there were plenty of people who had come at 8:00 a.m. and were still there at 5:00 p.m., blue lips angrily curled.

So, here I am in a cozy coffeehouse, a short walk from Tivoli Gardens, about to go out to dinner in Christiana, and I'm wondering: Is this insanity really worth it? Just so I can add to the genre of griping-waiting-in-line articles? Just to penetrate the inner sanctum? I don't think so. My reporting from Copenhagen will simply have to take a different angle--as did my geoengineering piece yesterday

for Mother Jones. Because with just a few days in this beautiful town, I am not at all sure I want to spend one of them freezing in a nightmarish line.....