A tiny speck of of the mineral ringwoodite makes waves. 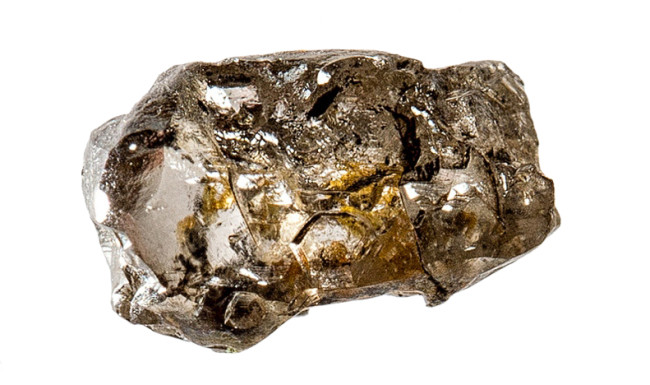 The 5-millimeter-long diamond — and its water-carrying ringwoodite (not visible) — formed deep within Earth's mantle. | Richard Siemens/University of Alberta

A tiny diamond weighing less than 1∕200th of an ounce makes for a puny engagement ring, but what it tells geologists is priceless: Vast quantities of water might lurk unseen deep within the hot, thousand-degree confines of Earth.

In 2009, Canadian geochemist Graham Pearson and his graduate student John McNeill were analyzing a pile of diamonds that formed at least 325 miles underground hundreds of millions of years ago.

After emerging through a volcanic explosion, the diamonds were found in 2008 at the edge of the Amazon rainforest. McNeill and Pearson were studying them to look for clues about the evolution and origin of the mantle, the thickest of Earth’s inner layers. After shining a laser into hundreds of diamonds, probing their composition, McNeill spotted something he hadn’t seen before: a speck of a mineral called ringwoodite. Though thought to be plentiful in the planet’s deep, high-pressure interior, scientists had previously seen the mineral only in meteorites, or synthesized in labs.

Within that speck of ringwoodite, it turned out, was something stranger: a tiny bit of water, trapped and distributed microscopically in the mineral during its formation. Pearson completed a detailed analysis of the diamond this year, confirming the water’s discovery.

Finding direct evidence of a watery underworld “was a huge piece of luck,” says Pearson. And that world could be very watery. The mantle is vast, and each speck of ringwoodite within it could contain water — potentially enough to rival the water in Earth’s oceans.