Even Fox News, in its sweetly guarded, vulnerability-fearing way, is conceding that Denver has been a pretty green convention. Once you get past their unfeeling headline, they show they are all mush inside. 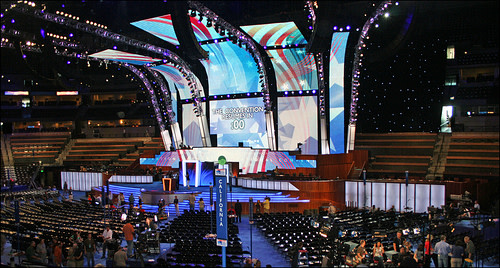 There are free bikes downtown, some new wind power facilities. Green key-cards at the hotels. But more important, really, was the fact that Hillary dedicated one of the only substantive portions of her speech (most of it was 'we made 18 million cracks in that glass ceiling, which changed that ceiling into a mosaic of caring, and Harriet Tubman said you've got to keep banging your head through that mosaic etc etc') to talk about green-collar jobs. That speech did make a little worried about party unity though. I mean, everybody is praising it as a great speech, but wasn't it kind of, I am great, I laid waste in the primary, I proved something, and oh yeah, vote for Barack? Because while he may not be a woman, like me, the man is at least black, like Harriet Tubman?