Dear President-Elect Trump: Climate change is not a hoax. Please consider this: It's raining near the North Pole.

A postcard to the incoming president 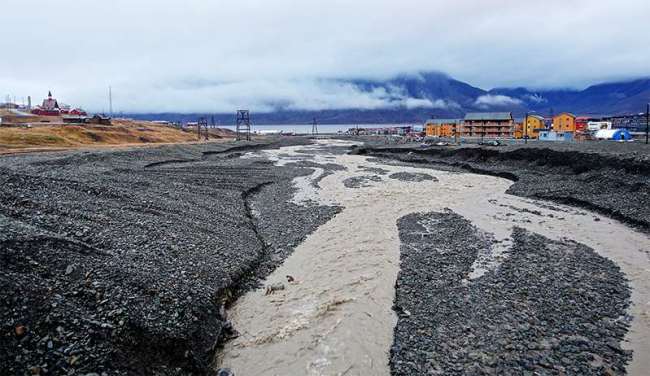 Heavy rain and little snow has been the story for weeks in the town of Longyearbyen on the Arctic archipelago of Svalbard. The local church was evacuated yesterday (Nov. 8, 2016) because heavy rainfall had raised the risk of landslides. It should be cold and snowing this time of year in a town located just 800 miles from the North Pole. (Photo: Courtesy Leif Magne Helgesen) Dear President-Elect Trump: You've said publicly that climate change is a "hoax," and that the concept "was created by and for the Chinese in order to make U.S. manufacturing non-competitive." During the presidential campaign, you also said that you would zero out all federal funding related to climate change. With that in mind, I wanted to send you this 'postcard' from the Arctic, a region I love dearly. For the people who live in the Arctic, climate change is no hoax. They have been living with its effects for quite some time now. The region is warming twice as fast as any other on Earth. So in this postcard, I wanted to share with you just one small piece of that very large story. Some of what follows comes from Leif Magne Helgesen, the pastor of the planet's northernmost church. He tends to the spiritual needs of the residents of Longyearbyen on the archipelago of Svalbard, which is located a scant 800 miles from the North Pole. 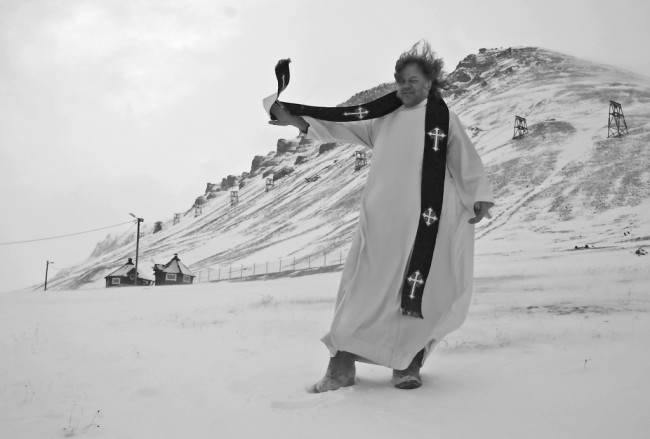 Leif Magne Helgesen, pastor of the world's northernmost church, in Longyearbyen, Svalbard. (Photo: Leif Jone Ølberg) On the day that you won the presidency, Mr. Trump, the church, as well as other parts of the town, were evacuated because of the risk of landslides due to near-record rainfall. This is in winter, not far from the North Pole. As you might imagine, it should be cold and snowing there now, not warm and raining. A total of 259 people in the town of 2,144 people were forced to evacuate from residences, dorms and guest lodging on Monday and Tuesday. This is not just a one-off. During October, when temperatures should have been plummeting, and snow should have been flying, temperatures were running nearly 15 degrees F above normal. For several days in October, in fact, Longyearbyen was the warmest place in Norway — warmer than Oslo, 1,269 miles to the south, pastor Helgesen writes. Record rainfall at that time triggered several landslides around town, including one on the hillside above Longyearbyen's cemetery. "Luckily they turned away and left the graveyard alone," Helgesen reports. 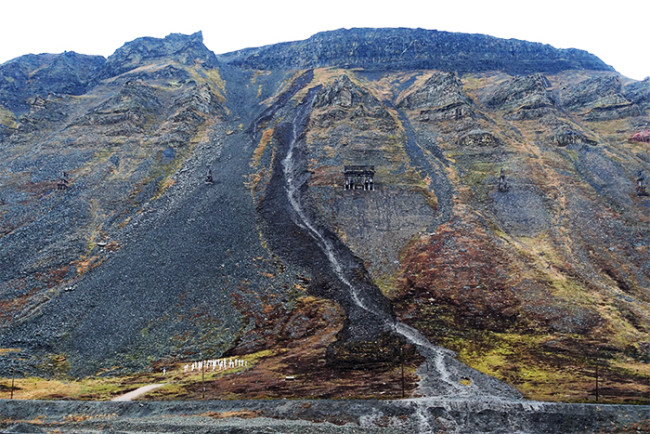 A landslide near Longyearbyen's church nearly took out the town's historic cemetary. Photo: Courtesy Leif Magne Helgesen The photograph above, taken by the pastor, shows that landslide. If you look closely, you can see a cluster of white crosses just adjancent to it. The warmth is not just a geographic fluke targeting a tiny area. It is shockingly warm across large swaths of the Arctic. Temperatures in some locations have lately been running 27 degrees F above normal, as this graphic shows:

You are looking down on the entire Arctic region, from above the North Pole — located at the center, where the straight lines intersect. The outer part of the circle is at 60 degrees north latitude, just a little south of the Arctic Circle. Svalbard is the cluster of islands just above where the lines meet, and slightly to the left. The number '9' sits on top of it, indicating temperatures that are 9 degrees C above normal for the period Nov. 2nd through the 7th. 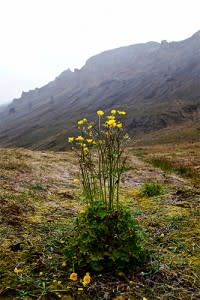 A meadow buttercup sprouted near Longyearbyen's church in August. (Photo: Courtesy Leif Magne Helgesen) This warmth is part of a longer-term trend that has been having significant ecological effects. Pastor Helgesen saw evidence of this in August, when he found a tall, beautiful meadow buttercup flowering near his church. You can see it in the photo at right. As Helgesen puts it:

Never before have I seen such a flower in the archipelago. There are no trees or tall flowers on Svalbard. A week after I posted the image online, the flower was removed by the Governor. It was an unwanted species that belonged to the mainland and not the Arctic landscape in the north. The danger is that new species in the Arctic will displace existing species and alter local ecosystems.

Of course, one town's experience in and of itself is not proof that climate change is real. I simply offer these anecdotes as examples of what the people who live in the high north have been experiencing for years now. And I'm hoping and praying, Mr. Trump, that the personal experiences of a pastor and his flock will help you grasp the undeniable reality of climate change. Sincerely, Tom Yulsman