Dealing with the Hazards from Tornadoes and Eruptions

Natural disasters come with a lot of destructive energy. 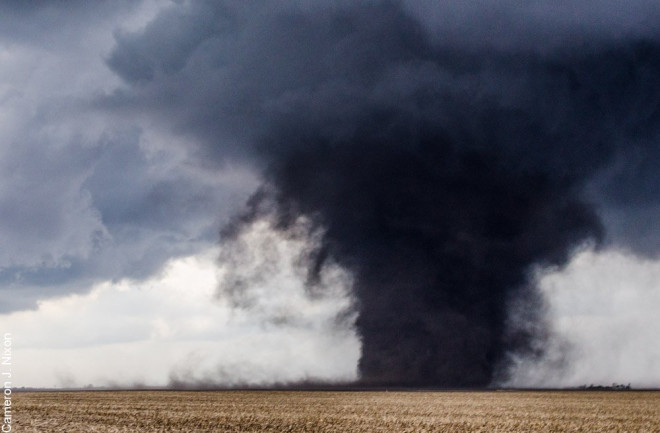 I live in Ohio and one thing I’ve had to get used to here that I didn’t experience most places I have lived are tornadoes. This week, parts of western Ohio got hit by some big and destructive tornadoes and in total, at least 17 tornadoes were confirmed across the state. This is part of a larger tornado outbreak across the central U.S. Tornadoes are a lot like volcanic eruptions: they’ve highly destructive and nearly impossible to predict exactly when/where they will occur.

Across the U.S. each year, there is on average over 1,200 tornadoes of various sizes. Like volcanic eruptions, there is a scale to categorize tornado strength. Tornadoes form when you have cold air up high in the atmosphere and moist, warm air at the surface. Combine that with twisting winds that get stronger as you go up. So places where cold and warm airmasses meet tend to be hotbeds of tornadoes.

Whereas volcanologists talk about the Volcanic Explosivity Index (VEI) that looks at how much stuff was blasted out during an eruption, tornadoes are compared with Enhanced Fujita Scale (EF) that uses wind speed and damage. Tornadoes rank from EF0-5 as the 3-second winds increase from 65-85 mph (104-136 km/h) to over 200 mph (320 km/h). The tornado that hit Celina, Ohio was an EF3 while the even larger one near Lawrence, Kansas was an EF4.

The winds of a tornado are the primary driver of destruction but in two ways. First, the wind itself can knock down pretty much any man-made structure if the tornado is large enough and it sustains a direct hit. Images from the path of tornadoes show that clearly.

Also, the vortex of the tornado will suck material into the tornado and upwards, so debris can be lofted over 6 kilometers (20,000 feet) into the air. One Monday night here in Ohio, that debris was captured on the weather radar as the storms tore through Celina and near Dayton. Debris from the tornado near Lawrence was thrown over 60 kilometers (40 miles)!

This kind of destruction is very much like some of the most dangerous volcanic hazards as well. Pyroclastic flows, generated by explosions or the collapse of a lava dome, generate swirling flows of debris that move down the volcano at 100-700 km/h (62-430 mph). All the rocks and ash being moved by the flow wipe out everything in their path and can carry new material as the flow travels. Images from the aftermath of the 1980 Mount St. Helens eruption show how easily these flows flattened massive trees and logging equipment.

Massive trees blown down by the pyroclastic flows from the May 1980 Mount St. Helens eruption. (Credit: USGS)

Although a little bit further from a tornado in its composition, volcanic mudflows (lahars) share the characteristic of weaponizing whatever material gets incorporated into the flow. Large boulders, trees, houses and more get mixed into the volcanic mud (made of ash and volcanic debris) and water, adding more material to destroy whatever is in the lahars’ paths.

Tornadoes and volcanic eruptions share other qualities. Although meteorologists and volcanologists can both read the signs that conditions might be right for a tornado or eruption, neither can specifically predict a time and place long in advance that either will happen. In both cases, we’re talking about forecasting, not prediction.

When we had our tornado warning in Granville on Monday night, it was because the storm headed are way had the potential to generate a tornado: right energy and rotating winds. This is much like warning people of an impending eruption based on earthquake activity, gas emissions and inflation of a volcano.

There is potentially a link between the size and location of tornado outbreaks and climate change. As more moist, warm air is carried across the continent in the jetstream, the potential for tornadoes increases. Climate models that predict more moist, warm air with climate change would cause longer and more frequent tornado outbreaks like the one occurring in the U.S. right now. However, there are models that show that the difference in wind speed with altitude may decrease as the climate shifts, so the longterm prognosis is unclear. One trend that has been noticed is an eastward creep of “tornado alley” across the continent.

In both cases, the best advice is to have a plan to protect yourself when government agencies tell you to watch out. However, the advice for the two threats are very different. For tornadoes, you need to hunker down in a well-protected area like the basement of a home — and don’t try to outrun the tornado. For volcanoes, the best advice is to get out before the eruption starts with evacuations and not “hunker down”.

Part of this comes from the fact that, in the U.S., tornadoes are much more common and widespread and to evacuate people when the danger of tornadoes is high is not practical. Also, although tornado likelihood can be forecast, an actual tornado and most importantly, its location, might not be known until minutes or seconds before it strikes.

For a volcano, most of the time the eruption is coming from a single location and the signs of an eruption could be apparent for days or longer, so evacuation can happen in a reasonable fashion. In both cases, people need to listen to the experts from the National Weather Service or the US Geological Survey (and not, let’s say, “YouTube experts”) and heed their warnings.

Luckily, the death tolls from both volcanic eruptions (worldwide) and tornadoes (U.S.) has decreased over the past 50 years, mostly thanks to better forecasting and preparedness. So, much like people living in the Pacific Northwest need to be prepared for a potential eruption from Mt. Hood or the next large earthquake, people in the middle of the continent need to be ready for tornadoes.

Does this mean people shouldn’t live there? Likely that will not change as people will live in places even with such hazards present. However, in the face of tornadoes or eruptions, we need to stay on top of the science to monitor and forecast these devastating events and prepare people for their consequences.