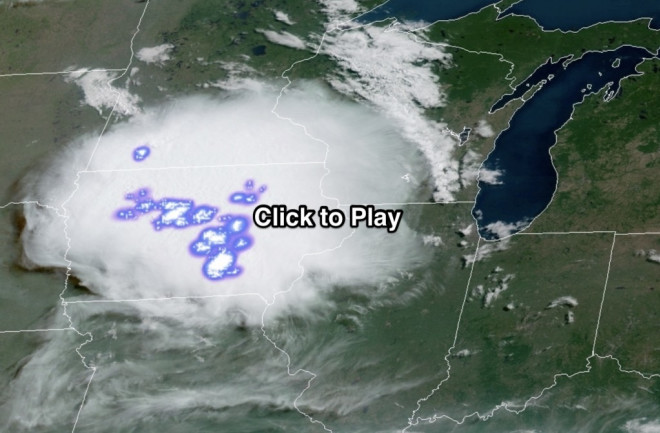 An animation of GOES-16 weather satellite imagery showing a complex of thunderstorms over Iowa on June 14, 2018, with an overlay of lightning mapping. (Source: RAMMB/CIRA GOES-16 Loop of the Day) As a giant complex of thunderstorms blew across Iowa and into Illinois and Missouri on June 14, the GOES-16 weather satellite was watching — and mapping the crackling lightning discharges. The result is the video above, originally posted to the terrific GOES-16 Loop of the Day site. I found it so compelling that I wanted to share it here at ImaGeo. You're looking at a "mesoscale convective system" — a group of thunderstorms that organize into a large complex. And this MCS is indeed very large — it spans the entire state of Iowa! But it wasn't just huge. It also dumped more than five inches of rain in Iowa. But the one thing that makes this video so compelling, in my view, is the mapping of the lightning that crackles within the storm complex. This is made possible by a detector on GOES-16 called the Geostationary Lightning Mapper. GLM detects near-infrared light (invisible to our eyes) coming from lightning. It can see lightning within clouds, moving from cloud-to-cloud, and also from clouds to the ground. GLM also happens to be the first instrument to continually monitor lightning from space. A dramatic increase in lightning activity often occurs many minutes before weather radars can detect a storm blossoming into a severe menace with the potential to unleash damaging winds, hail and even tornadoes. So by combining data from the lightning mapper with other satellite data, plus radar and surface observations, forecasters may be able to issue earlier warnings for severe thunderstorms and tornadoes, while also reducing false alarms. Here's another time lapse animation featuring GLM data, rendered in a different way than the one above: https://youtu.be/SEA5nFw_Mts The time lapse covers a long period of time — from April 28 through May 1, 2017. Toward the beginning, lightning crackles in a line of storms that stretches across much of the U.S. midsection. GLM's lightning display is particular compelling during the nighttime hours. As things progress, a low-pressure system swirls to the west as moisture streams up from the Gulf of Mexico, continuing to feed storms in Texas and Louisiana and then up into the Midwest. During the day on April 30th, the low-pressure system is particularly clear — and the lightning continues. https://vimeo.com/271164181 A GLM instrument was also installed on the newer GOES-17 satellite, a sister of GOES-16 that was launched on March 1, 2018. The time lapse video above shows lightning associated with storms moving across a large portion of the U.S. on May 2 and 3 of this year. Unfortunately, a cooling system on a 16-channel camera aboard GOES-17, called the Advanced Baseline Imager, is on the fritz. This means 13 of the 16 channels, which are designed to monitor the Earth in the infrared and near-infrared portions of the spectrum, are not able to do their job for half of the day. Engineers are working on it. In the meantime, the satellite's other instruments — including the lightning mapper — appear to be doing just fine.