An animation of nighttime images captured by the GOES-16 weather satellite on December 28, 2017. Long, parallel bands of cumulus clouds are seen streaming out over the Atlantic. (Images: RAMMB/SLIDER. GIF animation: Tom Yulsman) Baby, it's cold outside! If you live pretty much anywhere in Canada, or in the United States east of the Rockies, that wonderful song from the 1940s pretty much sums up the conditions as 2017 draws to a close. And when revelers watch the ball drop in New York City's Times Square on New Years Eve, they will have to endure forecast temperatures of 10°F – with a wind chill of -5°F. The brisk northwesterly winds that have carried the bitterly cold Arctic air have given rise to beautiful cloud formations over the Atlantic Ocean. You can see them in the animation of above, consisting of GOES-16 satellite imagery: long, parallel rows of cumulus clouds pouring to the southeast. These cloud formations are a well known phenomenon known as "cloud streets." This graphic from NOAA, along with the explanation from NASA's Earth Observatory, can help you visualize what's going on:

Source: NOAA Cloud streets are long parallel bands of cumulusclouds that form when cold air blows over warmer waters and a warmer air layer (temperature inversion) rests over the top of both. The comparatively warm water gives up heat and moisture to the cold air above, and columns of heated air called thermals naturally rise through the atmosphere. The temperature inversion acts like a lid. When the rising thermals hit it, they roll over and loop back on themselves, creating parallel cylinders of rotating air. As this happens, the moisture cools and condenses into flat-bottomed, fluffy-topped cumulus clouds that line up parallel to the direction of the prevailing winds.

Here's how the the Moderate Resolution Imaging Spectroradiometer, or MODIS instrument, aboard NASA’s Terra satellite captured the scene on Dec. 28th: 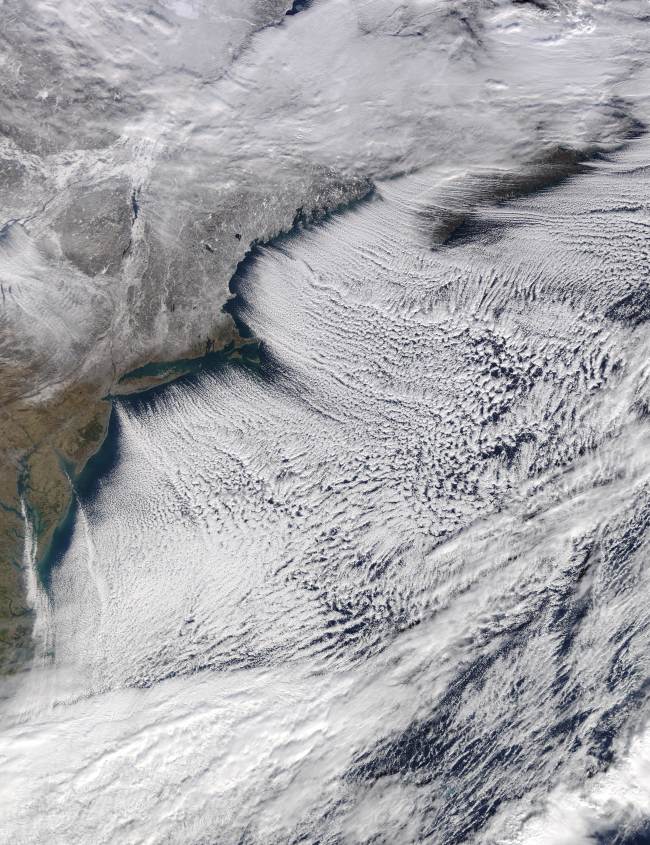 Cloud streets billow out from the U.S. eastern seaboard on Dec. 28, 2017. (Source: NASA Earth Observatory) Not all of North America is in the Arctic's icy grip right now, as the map below illustrates. It shows the forecast for how temperatures will vary from normal today (Saturday, Dec. 30th). The red and orange tones covering the western United States are indicative of warmer than average temperatures. 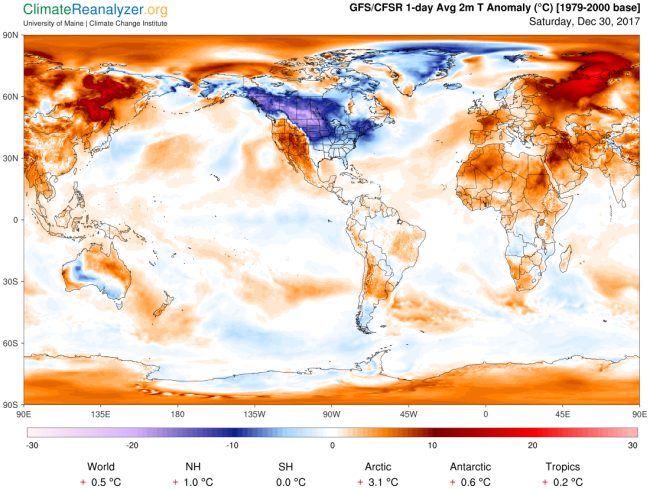 Source: Climate Reanalyzer What accounts for this curious pattern? As NASA explains it:

The cold weather pattern has its origins in a large bulge, or ridge, in the jet stream that has brought unseasonably warm weather to Alaska. On the east side of this ridge, a trough in the jet stream plunged southward, bringing plenty of Arctic air with it. This orientation of the jet stream, which looks similar to the greek letter omega, is known as an omega block.

President Trump recently used the frigid weather blanketing part of the U.S. to pooh pooh climate change: https://twitter.com/realDonaldTrump/status/946531657229701120?ref_src=twsrc%5Etfw&ref_url=https%3A%2F%2Fwww.nytimes.com%2F2017%2F12%2F28%2Fclimate%2Ftrump-tweet-global-warming.html In that one Tweet he ignored so much:

As my friend and colleague Bob Henson put it in a post at the Category 6 blog:

Climate change doesn’t get rid of weather. We can still expect cold waves and heat waves, even as greenhouse gases make our overall climate warmer over time. And since global warming doesn’t change the fact that Earth is tilted on its axis, winter still happens.

As do silly comments from politicians who should know better.