We know a lot about the crafty and resilient microbe, but it remains a deadly threat. 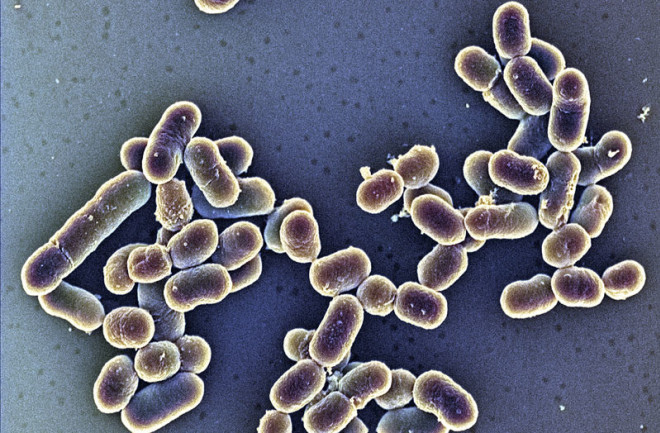 Listeria monocytogenes lives in soil, streams, rotting vegetation and the guts of farm animals. It loves cold temperatures. When transmitted to humans, the bacterium can kill. | Gary Gaugler/Science Source

One day in August 2011, Penny Hauser spied a bin of fresh cantaloupes at a grocery store in Colorado Springs, Colorado. “Mike loves cantaloupe,” she thought. While recovering from a grueling bone marrow transplant, her 68-year-old spouse had dropped 30 pounds. Now he was on high-dose corticosteroids and eager to eat. So as Mike enjoyed the melon later that day, Penny inwardly cheered.

But weeks later, something was wrong. “It was a Saturday night, and Mike was watching college football,” Penny recalls. “I went to bed.” By 2 a.m., he still hadn’t joined her. She found him on the couch in agony. “My head is killing me,” he groaned, taking a half-tab of Vicodin. For the rest of the night, the retired podiatrist stared at their bedroom ceiling.

The following morning, Mike vomited and felt warm to the touch. Soon he couldn’t walk, and then he stopped talking altogether. He landed in the ER, where a spinal tap showed meningitis — inflammation usually caused by an infection. He received intravenous antibiotics and was taken to the ICU.

Meanwhile, doctors needed to determine the cause of his illness. They took a sample of Mike’s spinal fluid and streaked a few murky drops on a plate of agar infused with blood. Twenty-four hours later, its ruby surface sported grayish bacterial clumps surrounded by pale yellow halos. Something in Mike’s spinal fluid was digesting blood. Further tests revealed it was Listeria monocytogenes, a mysterious microbe whose transmission eluded experts until the 1980s.

What's in a Name?

Listeria’s name is a history in itself. In 1924, after an unknown epidemic suddenly felled six laboratory rabbits, Cambridge University bacteriologist E.G.D. Murray isolated the killer, calling it Bacterium monocytogenes.

Sixteen years later, physician J.H.H. Pirie renamed the bug in honor of Lord Joseph Lister — the first surgeon to routinely sterilize instruments and disinfect wounds. Over a four-year period in the 19th century, Lister slashed post-operative fatalities from 45 percent to 15 percent in a Glasgow trauma ward. He soon became famous.

During the 20th century, the more scientists learned about the microbe bearing Lister’s name, the more the 19th-century surgeon would have marveled. Listeria was ubiquitous, living in soil, streams, rotting vegetation and the guts of farm animals. It also seemed to thrive in the cold.

But its true dangers weren’t evident until 1949, when an outbreak in Germany killed scores of infants; autopsies showed the bacterium in their livers, spleens, lungs and brains. Listeria also sickened people with weakened immune systems, such as pregnant women and medically fragile adults.

By the 1970s, it was no longer surprising to find Listeria in a desperately ill newborn, transplant patient or chemotherapy patient. But even then, one mystery remained: How did these high-risk hosts “catch” the bug in the first place?

In 1981, Walter Schlech tracked Listeria to a cabbage farm on Prince Edward Island near Nova Scotia. He soon proved that the bacterium entered humans via contaminated food. (Credit: Walter Schlech)

To Catch a Killer

Walter Schlech, then of the Centers for Disease Control and Prevention, was on the case. In 1981, the young field epidemiologist officer arrived in Nova Scotia to investigate a listeriosis outbreak that eventually claimed 18 lives.

The coleslaw’s shredded cabbage came from a Prince Edward Island farm whose owner fertilized with raw manure from sheep (a source of Listeria). The owner stored his cabbages in a cold shed, a setting guaranteed to spur the bug’s growth.

Local veterinary records offered one more piece of evidence: Two years earlier, a couple of the farmer’s sheep died of Listeria. In 1983, Schlech published a landmark paper in the New England Journal of Medicine proposing a mode of transmission that was practically irrefutable: Listeria entered humans through contaminated food.

In the early 1990s, government regulations helped lower cases of foodborne listeriosis by requiring routine surveillance of food-processing sites. But Listeria is still finding its way into new edibles. Since 2010, outbreaks have been linked to fresh produce: chopped celery, chopped and bagged romaine lettuce, and caramel apples.

Despite sensitive genetic tools that link cases and solve outbreaks faster than ever, in our modern world of refrigerated and ready-to-eat food, Listeria continues to thrive. That’s because — unlike other foodborne baddies like Salmonella, Campylobacter and toxin-bearing E. coli — it happily blooms in the cold. Even frozen vegetables can harbor the menace.

Though medical scientists have cracked many of Listeria’s secrets, the disease continues to harm. In the U.S. alone, 19 percent of the roughly 1,500 contaminated-food related deaths per year are caused by the bacterium. And Listeria’s long incubation from ingestion to illness (measured in weeks to months) hinders early detection of outbreaks.

Thanks to our natural host defenses, most of us who consume Listeria never know the difference. Usually our bodies’ immune systems neutralize the intruder. But it still lurks pretty much everywhere.

Although Listeria is killed by cooking, the bug is hardy, surviving weeks to years in soil and water. So even though we have increasingly sophisticated ways of tracking the microbe, and there are proprietary sprays (used in industrial settings) that curb its growth, we shouldn’t be complacent when it comes to food safety. Nor should government regulators and third-party auditors be complacent when inspecting food-processing plants.

Just ask Penny Hauser. On Feb. 12, 2012, his 69th birthday, Mike died after months of sickness unleashed by Listeria riding the rind of a Colorado melon.