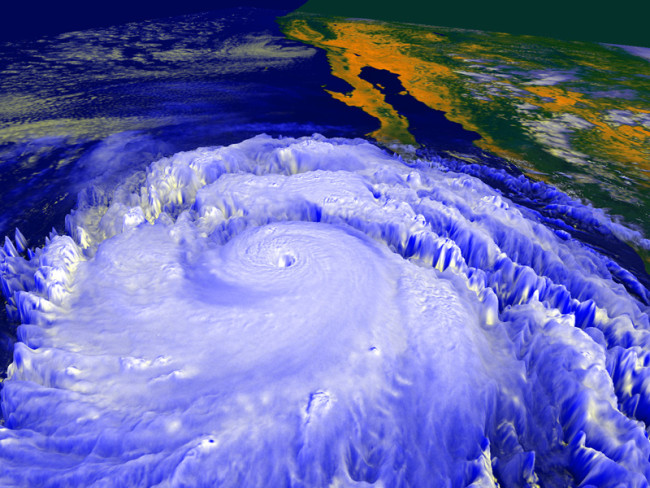 Well, I am off to Ithaca today to deliver my first major talk (tomorrow) on the subject of hurricanes and global warming, sponsored by the Cornell Department of Communication and co-sponsored by the Department of Chemistry & Chemical Biology, the Department of Earth & Atmospheric Sciences, and the Ethical, Legal, & Social Issues focus area of New Life Sciences Initiative. I really appreciate the invite and opportunity to deliver this presentation, as it has been an early chance to develop a talk and accompanying slide show that I will be continuing to hone between now and the June release of Storm World. I guess my audience at Cornell will be favored in the sense that they're getting entirely new content from me; but on the other hand, they're also getting new content that has not yet been, er, field tested. In any event, for those who are interested in the gist of what I'll have to say but not about to fly to Ithaca to hear it (especially given how the weather is looking), here is the working abstract:

Science at High Wind Speeds: Hurricanes, Politics, and the Battle Over Global Warming It may be the most fraught issue in meteorology today: Is global warming increasing the ferocity of hurricanes? Set against a backdrop of interest group politicking, media excesses, scientific suppression by the Bush administration, and storms slamming the coasts, the massive attention to this subject over the last several years helped to thrust a group of researchers into the political and scientific argument of their lives. In this talk, a prelude to his forthcoming book Storm World, author Chris Mooney introduces the relatively new science of "hurricane climatology" and surveys the political, social, and meteorological context that made it matter so much. In the process, he explains what scientists can learn, from such high-profile conflicts, about how to communicate their knowledge to a media and public desperate for it (but not in the form of equations!).

Any and all feedback appreciated, from Cornellians in attendance or others!