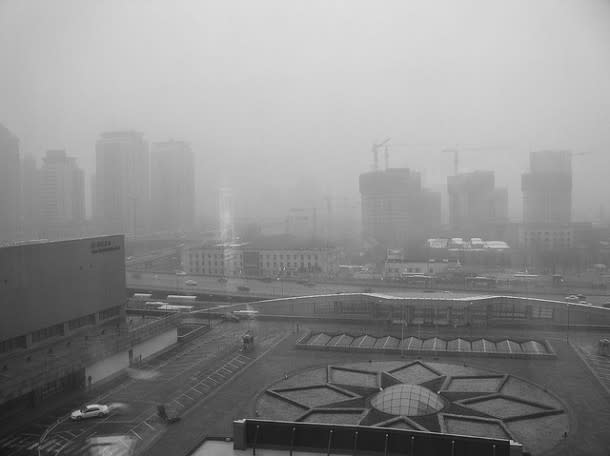 Beijing smog as seen from the China World Hotel, March 2003.

While top Chinese government officials have many advantages in terms of wealth, education, and status compared to most of their countrymen, the consolation remained that the rich had to breathe the same polluted air as the poor in smog-ridden cities like Beijing. But as a story in the New York Timespoints out

, that may not be entirely accurate:

As it turns out, the homes and offices of many top leaders are filtered by high-end devices, at least according to a Chinese company, the Broad Group, which has been promoting its air-purifying machines in advertisements that highlight their ubiquity in places where many officials work and live. The company’s vice president, Zhang Zhong, said there were more than 200 purifiers scattered throughout Great Hall of the People, the office of China’s president, Hu Jintao, and Zhongnanhai, the walled compound for senior leaders and their families. “Creating clean, healthy air for our national leaders is a blessing to the people,” boasts the company’s promotional material, which includes endorsements from [leaders like] Long Yongtu, a top economic official who insists on bringing the device along for car rides and hotel stays. “Breathing clean air is a basic human need,” he says in a testimonial.

Basic human needs, it seems, need only be met for the elite. The news comes during a period of especially bad air pollution, in which the Chinese capital has been shrouded in a "beige pall" and the United States Embassy’s rooftop air monitoring device has for weeks repeatedly reported

unsafe levels of particulate matter. [via The New York Times