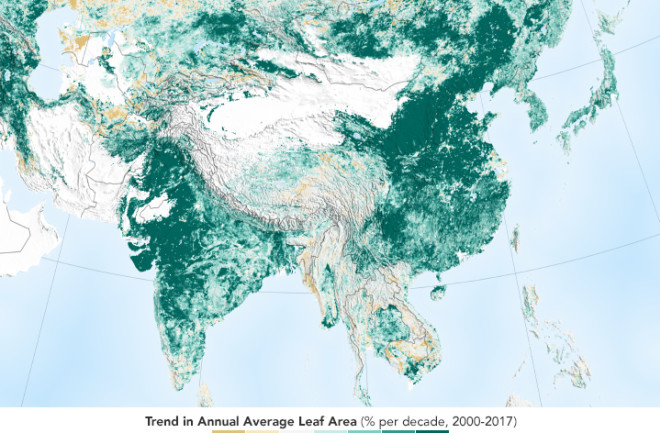 Since at least the early ’80s, the world has been getting greener. Satellite data show plants cover more and more land every year. That’s happening even as deforestation increases in the tropics. Scientists have attributed some of the greening to climate change and an effect called CO2 fertilization, where rising atmospheric carbon dioxide levels fuel photosynthesis, the process plants use to make food, and in turn help plants grow.

Now researchers have discovered that agriculture – expanding croplands – and aggressive forestry programs have made China and India the lead role players in this new greening.

“Our analysis of more accurate [and] recent satellite data reveal a greening pattern that is strikingly prominent in China and India, and overlapping with croplands worldwide,” said Chi Chen, a graduate student at Boston University, who authored the new research. “This suggests a more prominent role for the direct [driver] in greening the world.”

Chen and his team scrutinized satellite data from sensors that scanned the Earth twice a day between 2000 and 2017 and measured the area of green leaves and needles. The analysis revealed new plant growth has added an area the size of the Amazon rainforest in new leaves since 2000. The greening clustered in seven regions across six continents and also included parts of the American Midwest.

But in an unexpected twist, the data showed China and India are responsible for nearly one-third of the new leaf area.

Although China only contains about seven percent of the globe’s vegetated area, the rapidly developing nation accounted for 25 percent of the global increase in leaf area, the researchers report Tuesday in the journal Nature Sustainability. The boost in China’s greenery was equal to that of Russia, Canada and the United States combined, even though the three countries have the most vegetated land area.

The finding means “China and India, the two most populous and emerging countries, rather than the developed nations, are leaders in greening the lands,” Chen said.

Forestry programs may explain China’s expanding green landscape. “China is engineering ambitious programs to conserve and expand forests with the goal of mitigating land degradation, air pollution and climate change,” Chen said. Indeed, the researchers discovered that much of China’s greening, about 42 percent, is from forests.

Yet a sizable chunk of China’s that plant matter, around 32 percent, is also coming from croplands, the researchers report. India’s greening was most of India’s new growth — a whopping 82 percent — is from intensive agricultural practices that rely on heavy fertilizer use and irrigation systems.

The finding means, “human land use management plays a key role in greening the Earth — as important as CO2 fertilization and climate change,” Chen said. But the added vegetation does not offset the loss of vegetation from the tropics or the consequences for ecosystem sustainability and biodiversity, the team writes.