Via Climate 411, through the intermediaries of Matthew Yglesias and Bradford Plumer, here's a dramatic example of the government driving innovation -- the number of patents granted for sulfur-dioxide control technologies per year, with major air-quality legislation marked. 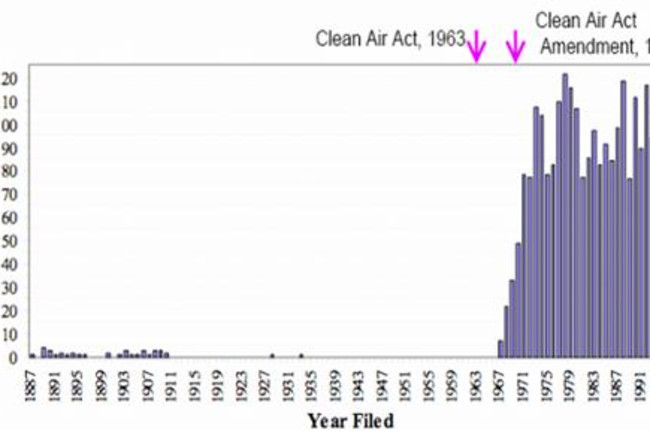 The graph is originally from this paper (pdf) by Margaret Taylor, Edward Rubin, and David Hounshell. It illustrates a crucial point that both liberals and conservatives should be able to come together behind: the engines of free-market creativity can be brought to bear on global problems whose costs are all in the externalities. But it doesn't just happen, if the short-term profitable course of action in the absence of massive government intervention is to keep despoiling the commons. Rather than legislating specific responses to complicated problems, change the incentive structure so that (for example) not polluting is more directly profitable than polluting. Right now, it's much cheaper to drag oil out of the ground and belch greenhouse gases into the atmosphere than to think hard about alternatives. It's far past time that we put our fingers on the scales to reward the hard thinking.