Carbon Capture and Storage Gets First Try-Outs Around the World 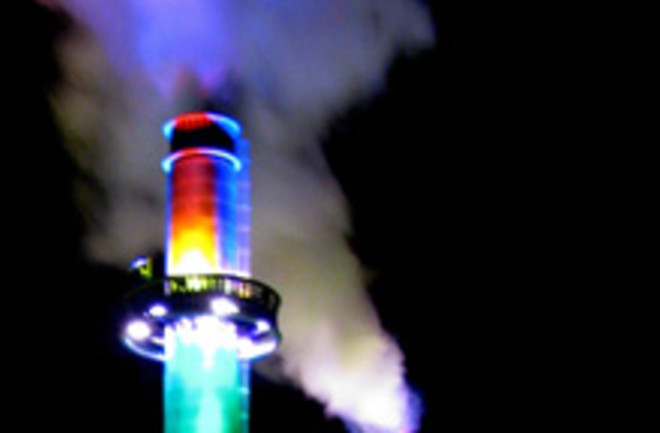 In large industrial experiments across the globe, factories and power plants are trying to capture the carbon dioxide that streams out of their flues in order to bury it deep underground. Researchers believe the greenhouse gas will stay put for thousands of years and therefore won't contribute to global warming, but the costs and long-term effects of the procedure are still unclear. The experiments currently underway are expected to determine whether carbon capture and storage will allow nations to continue burning fossil fuels for energy without ill effects. In France this month, the first retrofitted power plant will begin to use its new carbon capture and storage technology. The system used by the natural gas-burning power plant

will transport and store 60,000 tonnes of carbon dioxide every year in the nearby depleted gas field at Rousse – once the biggest onshore natural gas field in Europe, but which is now almost empty [The Guardian].

The carbon dioxide will flow through existing pipelines that once brought natural gas to the power plant. While the first new power plant using carbon capture and storage opened last year in Germany, some environmentalists say that the French plant's retrofit is an important example of how existing industries can be adapted to a future that requires clean energy. In China, the country's largest coal producer is launching its first carbon capture experiment at a new $3.5 billion coal-to-liquids plant in Mongolia.

With China still dependent on coal to meet the bulk of its energy needs, carbon capture and storage has been identified as a crucial element in the country's efforts to reduce greenhouse gas emissions, currently believed to be the highest in the world [Reuters].

The United States has lagged behind somewhat in large scale carbon capture and storage experiments since the Bush administration canceled the over-budget FutureGen project last year. But President Obama's energy secretary, Steven Chu, has signaled that he may revive at least part of the FutureGen project. Meanwhile, the agricultural giant Archer Daniels Midland is beginning a test project that will capture carbon dioxide emissions from a corn mill in a rock formation 8,000 feet deep. The company got $66.7 million comes from the Energy Department to fund the bulk of the experiment. However, not all environmentalists are sold on the technology, and Greenpeace is campaigning against the Archer Daniels Midland project.

"It is complete hubris to believe we can sink carbon dioxide into the ground and think there will be no leakage," said Carroll Muffett, a Greenpeace deputy campaigns director. "We see carbon capture as a serious distraction from real solutions. It's certainly not where public money should be going" [Los Angeles Times].