In Mexico, conservationists hope sustainable logging can provide jobs, protect the habitat and keep carbon from the atmosphere. 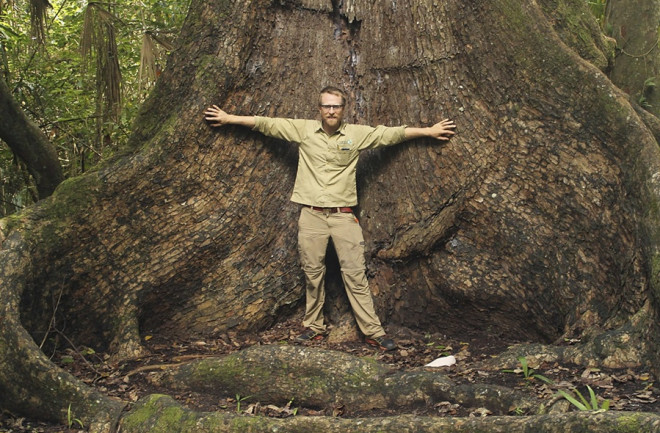 A massive mahogany trunk dwarfs Peter Ellis of The Nature Conservancy during a visit to Noh-Bec. Mahogany trees fetch top dollar for loggers, thanks to their workable and rot-resistant wood. (Credit: Courtesy of Peter Ellis)

On a sweaty October day in a dense, vine-laden forest near the town of Noh-Bec, Mexico, in the Yucatán Peninsula, a dozen American and Mexican conservation scientists bounce in the back of a truck headed down a narrow, rutted track of red mud. After a bone-jarring hour, the road widens. Teams of men haul logs from the forest and saw them into pieces, which they will later saw into lumber or carve into Popsicle sticks, feeding slash into furnaces to make charcoal.

The truck stops, and the scientists climb down and file into a small, sunny clearing. Noh-Bec forester Pascual Blanco Reyes, the tour leader, shows the scientists some of the forest’s most pampered residents: stick-thin, 3-foot-tall mahogany saplings. Reyes and his colleagues planted them after cutting mahogany trees nearly 2 feet in diameter. Each year for the next five years, forest workers will return to check on their young trees and remove competing species, Reyes tells the group, even though the slow-growing mahoganies won’t be large enough to cut for timber for another 75 years. Until then, the valuable trees will provide habitat for forest-dwelling animals and seed for the future forest.

Peter Ellis, a forest carbon scientist with the U.S.-based environmental nonprofit The Nature Conservancy (TNC), is impressed to see foresters caring for trees that only their grandchildren will profit from. “They’re really investing in the future here,” he says.

Ellis and his colleagues also see an even bigger opportunity in Noh-Bec’s forests — one of potentially global importance. Noh-Bec’s forest management practices not only provide good habitat and a sustainable wood harvest, they also ensure these trees will help keep carbon out of the atmosphere. Trees are about half carbon by mass, and tropical nations, including Mexico, will rely considerably on their forest carbon sequestration as they strive to reduce greenhouse gas emissions.

But they will need help. The economic incentives to clear forests for cattle ranching and farming are strong. That’s why Ellis and his collaborators are here. They want the developed world to pay for Noh-Bec’s forest — and others like it — to stay standing as a bulkhead against climate change.

Residents of the Yucatán Peninsula, like these Noh-Bec workers, have relied on the region’s forests since the ancient Maya. Today, the trees are used for furniture and other wood products, as well as left intact and sold as carbon emissions reductions. (Credit: Peter Ellis)

They see Noh-Bec as a perfect candidate for a carbon-reduction scheme developed over the past decade of climate negotiations. Under the program, called REDD+ (Reducing Emissions from Deforestation and forest Degradation; the “+” was added to include conservation practices), the developed world can buy verified forest emissions reductions to help meet their climate change targets. But for Noh-Bec to benefit from such a deal, Ellis and his team will first have to figure out how much carbon these sustainably logged forests hold.

Without financial incentives to keep forests well managed, both forests and the climate will pay the price. TNC and other conservation groups now believe that, with so many people living in the world’s remaining forests, helping communities sustainably and profitably use them is key to conservation. And Ellis and his team have high hopes that Noh-Bec will provide a powerful model for others throughout the Yucatán — and beyond.

People have relied on the forests of the Yucatán Peninsula for thousands of years. The ancient Maya who built the great cities of Tikal, Palenque and Calakmul used the region’s trees for building material and fuel wood. But populations on the peninsula grew so large that by around A.D. 900, the Maya had deforested large areas, amplifying droughts. Eventually they were forced to abandon most of their cities entirely. Today, Yucatán forests are home to around 500 kinds of trees. But only a few of those — including the mahogany Swietenia macrophylla, with its beautiful, workable and rot-resistant wood — are real moneymakers. One large trunk can net $1,000 or more. And because it grows in isolated clusters, it’s an easy species to harvest selectively. “Mahogany is king,” says Ellis.

Noh-Bec is not ancient; it was founded in the 1930s by chicleros — people who made their living mainly by harvesting natural chewing gum from chicle found in trees that abound in the Yucatán. They began to see mahogany’s value in the late 1970s and early ’80s, when communities regained the power to manage their own forests under the existing ejido system. In ejidos, elected councils run parcels of land, though government regulations still limit what they can do. Noh-Bec community members capitalized on their autonomy by building a sawmill and, later, charcoal furnaces to process and market furniture and other wood products.

These thin mahogany saplings will be ready to harvest in about 75 years. (Credit: Edward Ellis)

In 1993, the community also became the first forest certified as sustainably harvested by the Forest Stewardship Council, earning it a premium in international markets. Noh-Bec’s profits now come mainly from cutting and selling mahogany to developed-world customers who want to know that their purchases don’t contribute to deforestation.

But scientists don’t just want to keep the carbon locked up through sustainable forests; they also want to reduce emissions caused by the logging itself.

Environmental organizations have embraced a set of practices called “reduced-impact logging,” and loggers in some areas adopted it, but many have proved reluctant to buy new equipment or change practices. Noh-Bec, for example, plans out skid trails (the small paths used to haul logs) as recommended, but continues to use a large “tree farmer” to do the hauling, even though smaller machines would do less damage to nearby trees. The TNC team now hopes REDD+ can provide an incentive to adopt more protective practices. Last November, Norway, Britain and Germany announced they would pour over $5 billion into tropical countries for REDD+ initiatives between 2015 and 2020.

Private companies like Walt Disney are also planning REDD+ projects, as is the state of California. Most payments would go to state or national governments, though some arrangements could give money more directly to groups actually managing forests.

That’s exactly what Ellis and his colleagues did in the forests of Indonesia, where they created the model now being implemented in Mexico. Based on those studies, they reported in 2014 that reduced-impact logging could reduce carbon emissions by around 40 percent, compared with conventionally harvested sites.

Although a total logging ban could eliminate carbon emissions altogether in any given forest, Ellis says this would lead to emissions elsewhere. There will always be a demand for wood, he explains, and if it is not met by sustainable operations, it will be met by unsustainable ones.

The encouraging results from Indonesia inspired TNC staff in Mexico to consider including reduced-impact logging in their project to prepare the country for REDD+. If enterprises like Noh-Bec proved as effective at reducing emissions as they are at making money, Ellis thinks others could be motivated to emulate them, which could help Mexico meet its climate commitment.

“I’m surprised,” says Edward Ellis (no relation to Peter), an ecologist at the Universidad Veracruzana in Xalapa, Mexico, who led much of the fieldwork. “I didn’t think it would be so clear.”

But creating more Noh-Becs will require attention to economic factors beyond logging practices. While Noh-Bec’s operation brings in substantial profits — between $1,500 and $2,000 a year to each of the 216 people who collectively manage the 45,000-acre forest, and competitive wages for those who actually do the logging, according to Reyes — few other communities are organized to capitalize on sustainable forestry to the same extent. Some experts fear the small profits that other ejidos are likely to earn may not be enough to persuade community members to invest in more sophisticated forestry operations. Ann Snook of the Rainforest Alliance notes that members of some ejidos earn as little as $60 per year from forestry. “How do we make [forestry] sufficiently interesting to keep it going?” she asks.

Whether these communities see tangible benefits from REDD+ could ultimately help determine whether they get on board with the effort, or whether they turn toward cattle ranching or agriculture for profits. “They’re waiting to see if they will receive something in exchange for conservation,” says Reyes. “They’re hopeful and they’re motivated, but I think cautious is probably the word.”

This article originally appeared in print as "Forests of the Future."