California's Drought in Before and After Satellite Images

An animation of images from NASA's Terra satellite captured a year apart shows the effects of California's drought on mountain snow and the Central Valley. The first image was acquired on Feb. 15, 2013; the second on Feb. 16, 2014. (Note: The little white dots seen on the western slope of the Sierra Nevada mountains in the recent image are not snow; they're puffy clouds. Images: NASA. Animation: Tom Yulsman)

And it never failed that during the dry years the people forgot about the rich years, and during the wet years they lost all memory of the dry years. It was always that way. — John Steinbeck, "East of Eden"

Thus begins chapter 1 of "The West Without Water" by Lynn Ingram and Frances Malamud-Roam, a book that delves into 20 millennia of climate history to give us some insight into what we are experiencing in the Western United States now, and what we might need to prepare for in the future. It's an apt quote to go with the animation above — a before and after look at the continuing epic California drought. Each frame consists of data from NASA's Terra satellite. The first was captured on Feb. 15, 2013, when the snowpack in the Sierra Nevada mountains (which run from upper middle to lower right) was 72 percent of normal for the date. That was low and worrisome. On that date, a little less than 50 percent of California overall was suffering from some degree of drought, according to the U.S. Drought Monitor. None of the state was in extreme or exceptional drought, the highest two categories. Fed in large measure by irrigation water, the vast Central Valley just to the west of the mountains — one of the prime agricultural regions of the nation — was still relatively green. Flash forward a year to this past weekend — Feb. 16. That's the second image in the animation. The snowpack in the Sierra is visibly diminished. As of today, measurements show that it stands at just 26 percent of normal. This is despite recent storms. (If you'd like to check on current and past California snowpack conditions, go here.) And as of Feb. 11 of the current year, the Drought Monitor found 95 percent of California to be drought, with 70 percent the state categorized as in extreme or exceptional drought. As a result, vegetation throughout the state is suffering, including in the Central Valley. NASA scientists have used data from the MODIS instrument on the Terra and Aqua satellites to map where greening from plant growth is below normal for this time of year: 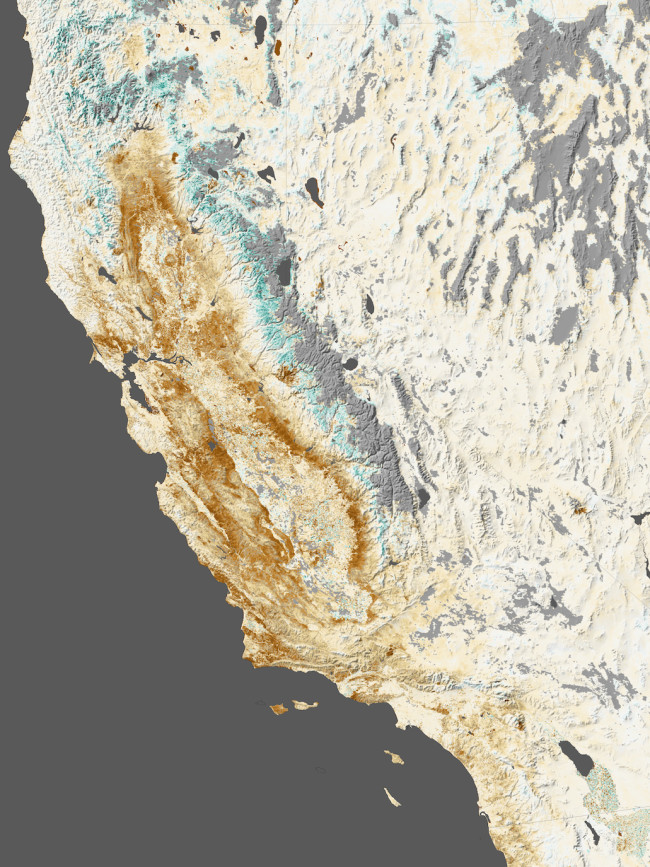 Based on data from the MODIS instrument aboard both the Terra and Aqua satellites, this map contrasts plant health from Jan. 17 to Feb. 1, 2014, against average conditions for the same period over the past decade. (Source: NASA Earth Observatory) The brown areas show areas with below average greenness. But look closely and you may note something curious: green tones signifying above average growth on the western slope of the Sierras. That might seem like a modicum of good news, but it is actually quite the opposite. If you want to try to guess why, have a look at the animation up top again. Do you see it? To understand what's going on, check out what Ramakrishna Nemani, a vegetation sensing expert at NASA’s Ames Research Center, had to say about the situation in a post at the space agency's Earth Observatory site:

In a normal year, much of the green areas near the mountains would be snow-covered . . . Since there is not much snow this year, the evergreen vegetation appears anomalously green. In fact, that is bad news for this time of the year.

When President Obama delivered drought aid to California last week, he used the opportunity to talk about climate change: "We have to be clear. A changing climate means that weather-related disasters like droughts, wildfires, storms, floods, are potentially going to be costlier and they're going to be harsher." The consensus of climate scientists is indeed that wet areas will tend to get wetter and dry ones — like the West — drier as human-caused climate change continues in coming decades. But we also have to remember the lessons from the deep climate history of the region, as told in "The West Without Water." "Clearly, as Steinbeck indicated, society has collectively 'lost its memory' of the Earth's climatic past," co-authors Ingram and Malamud-Roam write. And in California, that climatic past has included very long-lasting extremes at either end of the spectrum — both profound drought and flooding:

Extreme events have struck every few decades over the past century and a half, some with catastrophic results. Even more extreme events have occurred with some regularity in the distant past, though the intervals between them often lasted a century or more. Understanding the causes of these events and how they affected the West in the past can help current residents anticipate the effects when such events recur in the future — which they surely will.