California Fire: 'One of the Most Rapidly Spreading' in 50 Years 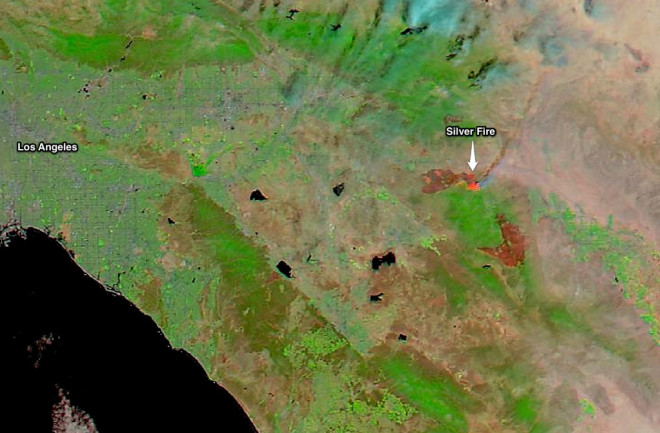 Southern California's Silver Fire as seen in a false color image from NASA's Aqua satellite captured Thursday, Aug. 8. (Image: NASA) | Update 8/9/13 3:15 p.m.: the original version of this post included a Twitpic as the lead graphic. It is no longer loading, so I've moved up the satellite image, redone parts of the post, and included a new Twitpic of the fire below. (See other updates below as well.)|  Southern California's Silver Fire ignited on Wednesday and promptly took off, burning through 1,000 acres an hour. It's initial spread through desiccated grass on steep hillsides was so fast that it prompted John Hawkins, the California Department of Forestry and Fire Protection chief in Riverside County, to tell the Los Angeles Times that it was "one of the most rapidly spreading … dangerous fires" that he had seen in 50 years with the agency. The image at the top of this post was captured by NASA's Aqua satellite on Thursday. It shows the Silver Fire in relation to Los Angeles to the west. I chose false color because it highlights the extent of the burn scar in rusty tones, and also shows the area of active burning. As I'm writing this early Friday morning, the fire has consumed 14,000 acres and is 20 percent contained. It has destroyed 26 homes and one commercial structure. (You can get updated information about the blaze from CalFire's incident information page here.) |Update 8/9/13, 3:15 p.m.:

| Here is a Twitpic of the fire: https://twitter.com/jaymcalderon/status/365816439237648384 Unfortunately, the weather forecast from the National Weather Service does not look good:

FRIDAY AFTERNOON AND EVENING...WESTERLY WIND OF 15-25 MPH IN THE MOUNTAIN PASSES AND DESERTS WITH GUSTS TO 40 MPH. THE WINDS WILL COMBINE WITH LOW RELATIVE HUMIDITY AND VERY DRY FUELS IN THESE AREAS TO INCREASE THE WILDFIRE RISK.

The latest forecast calls for winds tonight from the southwest at 10 to 15 miles per hour with gusts to 25 mph.

| As I've written previously, California experienced it's driest January through June on record. So the wildfire risk is indeed very high. And the Santa Ana winds haven't even kicked in yet. These are typically hot, dry and blustery winds that blow in out of the desert in the fall. I'll keep an eye on this and post updates as new images and information become available.